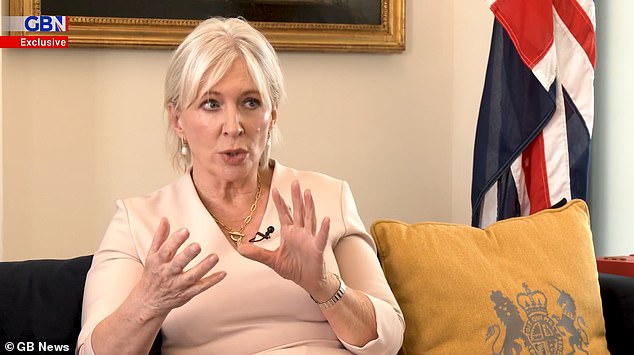 Nadine Dorries has waded into the trans sport row by saying it is impossible for transgender athletes to compete fairly against female competitors, insisting, ‘you cannot change your biology’.

The Culture Secretary called on sporting bodies to ‘protect female athletes’ and backed the idea of ‘having trans categories’ in order to maintain compassion for trans athletes.

It comes after fierce debate over whether transgender cyclist Emily Bridges, 21, should have been allowed to compete in the National Omnium Championships last month.

Female riders had threatened to boycott the event, while former athletes also spoke out calling for her to be barred from competing.

International governing body the Union Cycliste Internationale eventually ruled that Ms Bridges, who competed at the highest level as a man just a few weeks earlier and held the UK national junior men’s record over 25 miles, was ineligible.

Speaking to GB News today, Ms Dorries said: ‘You can choose your gender and we will support you and help you to do that… but you cannot change your biology.

‘I’m afraid even with those athletes that try to get their testosterone levels below the limits, if somebody has been through puberty, it isn’t that case that it will make a significant difference.

‘We’ve seen it happen recently with cycling and female athletes have had to stand up for themselves.’

Weighing in on the debate over Ms Bridges, the Culture Secretary said she would prefer sporting bodies to discuss the issue rather than an MP proposing a new law.

She continued: ‘I hate making laws. I would prefer the sporting bodies to come together and I have asked for a round table with them to discuss this.

‘So that they can come together and reach a position that protects female athletes, but also shows compassion to trans athletes and helps them achieve their goals.

‘Maybe that is having trans categories, I don’t know, but what I do know the bottom line is you cant have transwomen competing in females sports.’

Ms Bridges began hormone therapy last year and was previously declared eligible to compete as a woman under British Cycling’s policy as she had lowered her testosterone to the required level.

But her inclusion in the National Omnium Championships received a huge backlash.

Last month former Olympic medal-winning swimmer Sharron Davies said she had been contacted by a number of women cyclists who were afraid of the consequences of speaking out against her competing.

She called for the protection of female-only sports and the creation of an ‘open’ category to include trans athletes, says she ‘absolutely support anybody who chooses to identify as the opposite sex’.

The aunt of Ms Bridges told MailOnline that barring her niece from competing against Olympic hero Dame Laura Kenny and other women is ‘unfair’.

Speaking exclusively, Helen Bridges said: ‘It’s a bit of a tough one but I guess it’s unfair. It is unfair on Emily but the others obviously think it’s unfair on them so it’s a very, very difficult situation.

‘Maybe trans athletes should have their own class but I think they should be allowed to do it [compete in women’s sports]’.

Mrs Bridges said her niece must have suffered a great deal of ‘stress’, adding: ‘I really do feel for Emily. There’s a lot more to it given the amount of emotions she’s been through.’

On Wednesday, double Olympic champion Katie Archibald said she believes the International Olympic Committee, the UCI and British Cycling must come up with new guidelines that ensure ‘fairness’ for females.

She said: ‘The retained advantage of people who have gone through male puberty in strength, stamina, and physique, with or without testosterone suppression, has been well documented.

‘Cycling’s global governing body, by its president’s own admission, knows this. But they chose to delay action until it became sadly personal for one rider. That wasn’t fair.

‘We can’t continue in this way. I’d like the work to start now. I’d like the national and global sports bodies to work with the wider scientific community when developing their policies.

‘I’d like us all to continue welcoming trans athletes into our clubs, our training sessions, and our races. But I’d like us to do all this without sacrificing one of the foundational pillars of sport: fairness.’