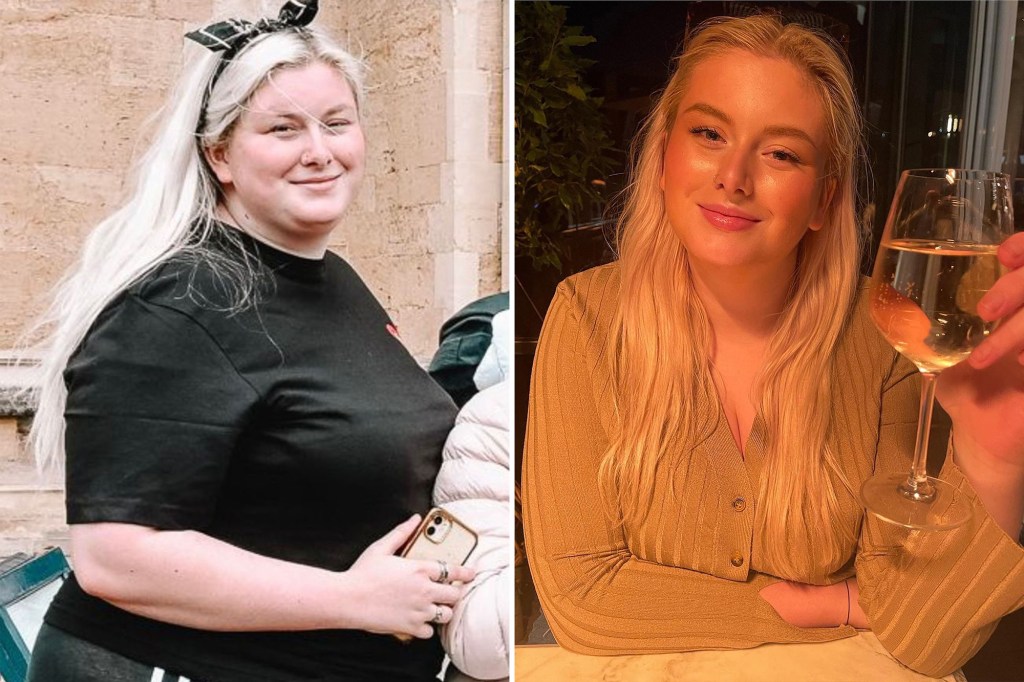 Megan Fowler chose to “rescue” her own life, whereas many college students rely on financial aid to fund their partying habits.

A 22-year-old international business major from an unknown university reveals that she spent approximately $3,600 of her student loan to pay for gastric sleeve surgery in Turkey.

Prior to surgery, Fowler weighed roughly 336 pounds at her heaviest. She had long felt self-conscious about her weight.

Since undergoing surgery, the native of the United Kingdom has dropped to just over 238 pounds, a weight she hasn’t seen since she was 18 years old.

“I’ve been dieting since I was 16. I tried all the fad diets, but they didn’t work, so I continued to gain weight,” Fowler told Caters News. She also worked as a pizza delivery girl to help pay for the treatment. “I used to avoid mirrors and refused to pose for photographs. People would force me into photographs, but I always agreed. I’ve always acted as the photographer.

Megan Fowler, age 22, utilized her student loan monies to finance her weight-loss surgery instead of paying off her school debt. She has decreased from 336 to 238 pounds.@findingmyfanny / CATERS NEWS

‘Many students waste their loan money on alcohol, but I utilized mine to save my life. I was actually compromising my education by not enrolling in college, so it was beneficial.

After a collegiate rugby accident crippled her back and pushed her out of the league, Fowler acknowledged she “continued eating” like an athlete and “struggle[d] to lose weight” as she became less mobile and unable to exercise.

At one point, she was so “ashamed” and “embarrassed” of her weight that she ceased attending classes in person and instead completed them remotely.

“I also stopped going out with friends and retreated into my home.”

Fowler had an epiphany when she spotted a woman on TikTok who had also undergone gastric sleeve surgery; she then proceeded to conduct her own research.

Before coming to Turkey for the operation, she acknowledged that her family did not approve of her unconventional fundraising strategies.

“My grandmother was furious that I spent a portion of my loan on surgery, but I can justify it because I don’t drink and because I wasn’t going out,” she added. “Many students waste their loan money on alcohol, but I utilized mine to save my life. It helped me because I was jeopardizing my education by not attending college.

Fowler is saving for a stomach tuck and excision of extra skin. However, she will use her student loan funds again if necessary.

When Fowler’s family realized how she was regaining her confidence and how much weight she was dropping, they were more supportive, she said.

Fowler continues to live a healthy lifestyle by maintaining an exercise regimen, making better food choices, and decreasing her daily caloric consumption from 3,500 to 1,200. She has even stopped ordering “fatty” takeout and binging on it.

She stated, “I’m also saving so much money, which is quite useful as a student.” “I’ve rediscovered the joy of cooking and the satisfaction of knowing exactly what I’m eating.”

In the meantime, Fowler just saw a photo of herself and was astonished by how she seemed, noting that she would frequently alter her earlier photos extensively to ensure that she appeared appropriately.

“I nearly lost it when I saw a photo of myself that I liked for the first time since I was 17,” she said. “I keep discovering old photographs and I can’t believe how much I’ve grown. I’m getting closer… It’s great to regain my confidence.”
@findingmyfanny / CATERS NEWS
“I used to shun mirrors and refuse to be photographed,” she explained. “I am now planning The Biggest Losers Ball for those who have had bariatric surgery and deserve a princess moment to commemorate how far they’ve come.”

“I nearly lost it when I saw a photo of myself that I liked for the first time since I was 17,” she said. “I keep discovering old photographs and I can’t believe how much I’ve grown. I’m making progress, but I still have a ways to go. It’s great to regain my confidence.”

Fowler is saving money to return to Turkey for a belly tuck and removal of extra skin. However, she will use her student loan funds again if necessary.

“[This operation] will mark the end of my weight loss journey and give me the confidence to go on vacation without wearing T-shirts and hoodies,” Fowler declared.

“Things are improving, and I expect to return to rugby in a few months. I am eager for the next phase of my life and to return to the rugby field.”

»My weight-loss operation was paid for with school loans«