Skip to content
Go Home «» News «» Breaking News «» My ex-husband is expecting a child with my new girlfriend: we’re known as ‘The Fruity Bunch.’ 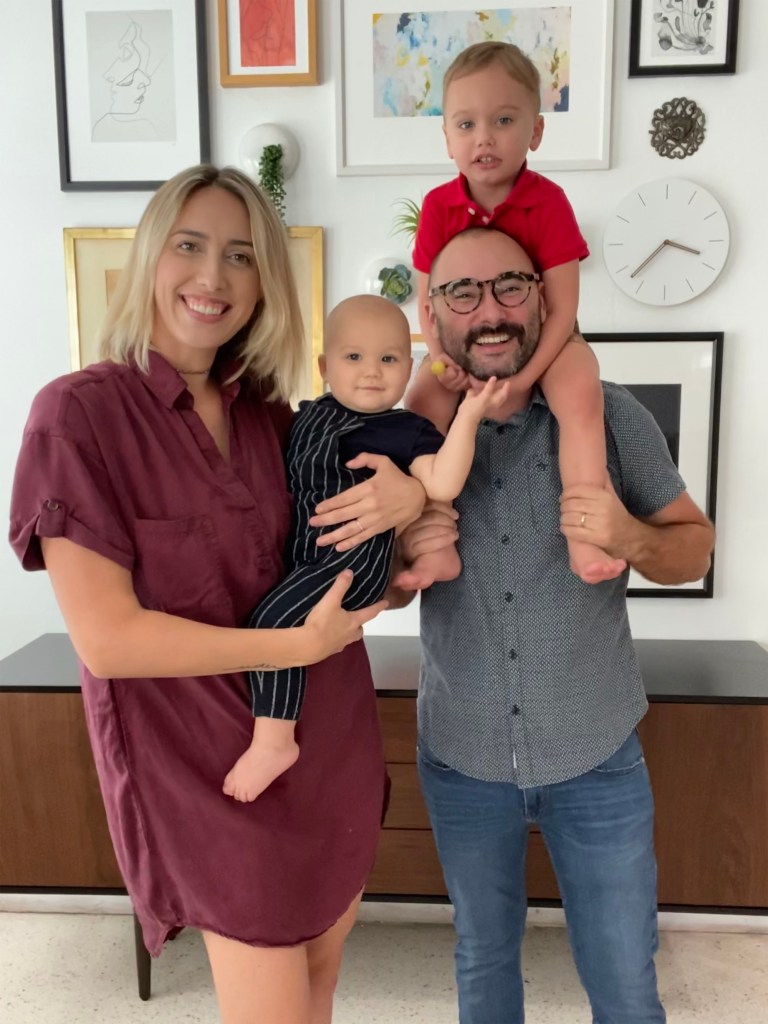 This blended family is challenging “The Brady Bunch” for popularity.

A woman from Florida has announced she is expecting a kid with her current girlfriend, the child being fathered by her ex-husband, who still resides with her and their two children.

Linda Fruits, 33, divorced Christopher Haerting, 36, in August 2021 after finding she was a lesbian during a “sexual awakening” while perusing through social media.

Fruits and Haerting elected to continue cohabiting for the sake of their two children, Elliot, 4, and Owen, 2.

“We told our sons that we will always be a family, that we will always love them, and that from now on, their mother and father will be raising them as best friends,” said Fruits, who documents her unconventional “Fruity Bunch” to over 100,000 followers and 2.6 million likes on TikTok.

In November of 2017, the out-and-proud mother began dating 36-year-old Maddy Gross, and they soon became inseparable. Gross quickly joined the Fruits-Haerting family and made plans to become a mother.

“On our second date, Maddy informed me she had always wanted to be a mother and was actively seeking a donor,” Fruits recounted. “We discussed how bizarre it would be if Christopher was the donor and our children were linked. We questioned him after five months.”

In August 2021, Linda Fruits, age 33, ended her eight-year marriage to Christopher Haerting, age 36. The couple is parents to two sons.

Haerting stated that by the time Fruits came out as gay, their marriage had become “sexless” and platonic, and they were living as best friends.

“It was still challenging at times, but we constantly discussed our emotions, which was quite helpful,” he said. “We both knew that our children are the most important thing in our lives, and that being able to see them every day was more essential than dividing our family and, frankly, making things more difficult” for all parties.

“Most couples whose love connection ends must separate in order to move on or because the relationship is poisonous,” the father continued. It’s been nice finding a way to move on while still co-parenting and living together.

When Gross emerged early this year, her close relationship with Fruits was instantly evident to the entire family.

After our first date, we were inseparable, according to Fruits. We spent as much time together as possible. Six months later, Maddy formally moved into the residence. Christopher was the first to offer to help pack up her belongings and prepare her apartment for rent.

Haerting claims he was not envious of his ex-rapid wife’s remarriage, and he welcomed Gross into his home if it meant keeping his children together.

“At that time, it made perfect sense for Maddy to move,” he explained. “I was never concerned or had any unfavorable feelings towards Linda or Maddy throughout that time.” I was genuinely elated.

The dedicated father continued, “Our children adore Maddy, and living together has been gratifying and enjoyable. We clean, cook, and eat together, and occasionally venture out with and without the children.”

Fruits and Gross approached Haerting earlier this year about their intention to have a child, with him as the father.

“It was not an immediate affirmative,” he admits. Before I could feel comfortable, I required answers to a number of questions regarding each of them.

“My major non-negotiable was that I did not want to be a mere donor,” Hearting said. “I desired to be included as the father/co-parent on the birth certificate. I was and am unconcerned about everything else besides this. We will find a solution. I am confident that we will all act in their best interests.”

The new and very modern Fruits-Gross-Haerting family revealed in November that they are expecting a child in May 2023.

According to the group, Elliot and Owen are “happy” about the anticipated birth of a sibling.

“We didn’t get to where we are overnight; it took a lot of communication, honesty, and plain old time:” Gross and Haerting are observed beside his two sons.
Jam Publications/@fruitsofmaternity

Haerting himself has moved on and has a partner at present.

Fruits added that her ex-husband has been honest with women he meets on dating apps so as not to waste their time.

She said, “It’s been a fantastic filter for finding someone who is empathetic and receptive.”

Even though they make it look effortless, the modern family insists that it requires hard work and frequent communication to keep everyone satisfied.
Jam Publications/@fruitsofmaternity

Despite appearing effortless, the mother acknowledges that the family has had to work hard to reach this stage.

“We didn’t get to where we are overnight; it took a lot of communication, honesty, and plain old time. “Everyone needs some time for the dust and fleeting emotions to settle,” she stated. “Perhaps by sharing our tale, we might affect a more favorable outcome for others. It does not have to be the same old poisonous split because no one, especially the children, benefits from this.”

»My ex-husband is expecting a child with my new girlfriend: we’re known as ‘The Fruity Bunch.’«