Skip to content
Go Home «» News «» Breaking News «» My child and I are barely 13 years apart in age; we even received braces at the same time 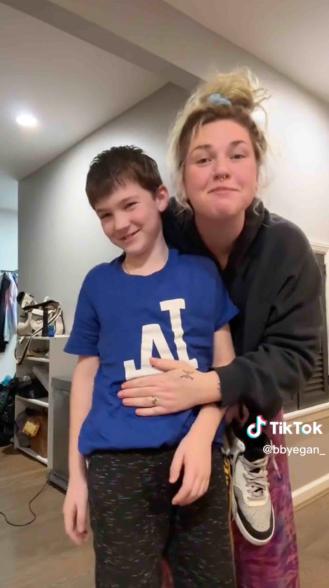 She is not joking.

A 22-year-old mother’s confession that she became pregnant and gave birth while she was barely a teenager has gone viral on TikTok.

The TikTok, which was uploaded by Gabbie Egan in mid-December, has garnered nearly 13 million views.

“Every year I have to address the reality that I had my son at the tender age of 13,” said Egan, whose son will be nine on January 23. “When I was 13 years old and foolish, I began dating this 16-year-old boy.”

“He got me pregnant, dropped out of high school, and has never been a part of my son’s life since,” Egan said of the father, who was a high school sophomore when she was in seventh grade.

Despite the failure of the relationship between Egan and the child’s father, Egan has enjoyed watching her son grow up.

“Don’t become a teen mother, okay? Because your baby’s father is not going to be s–t, Egan warned.

Since then, the mother and son have been inseparable, even exchanging shoes and getting braces together.

“My son need two sets of braces. “He recently got his first set of braces off, and we got ours at the same time,” added Egan, disclosing that she allegedly requested the boy’s father to contribute $4,000 toward the cost.

Egan disclosed in a TikTok that she and her son both have braces and can share footwear.

According to Egan, the father refused to pay anything for a child he “doesn’t see.”

Egan — who continually posts about her life as a mother — also disclosed that she has become a stepmom to three other children.

Several TikTok users applauded Egan for her involvement in her son’s life despite being so young.

“You are only 22 years old?! Wow that’s crazy!!! “Married, company owner, and a mother,” commented a commenter.

“I am sure having your son at such an early age had its hardships, but you will be able to do so much with him. “Remain optimistic,” one guy wrote.

“I love the bond you have with him, so much. I have watched y’all since day one and I’m so happy of the growth,” exclaimed another user.

»My child and I are barely 13 years apart in age; we even received braces at the same time«