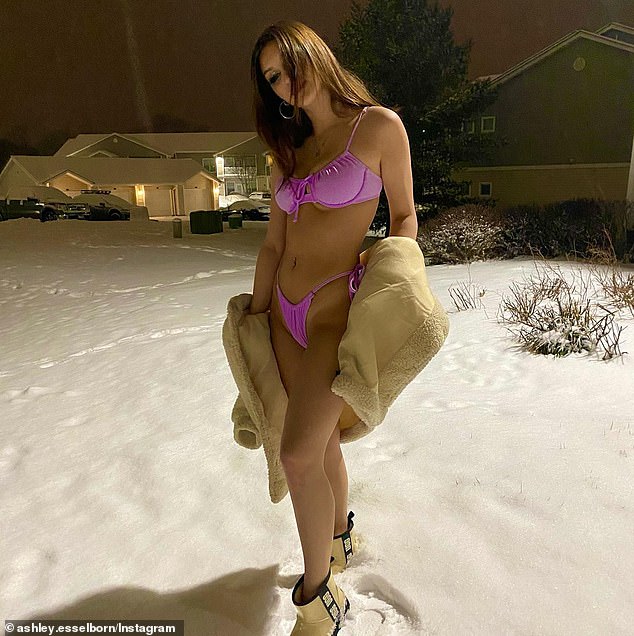 A Hooters waitress accused of cheering on the murder of a 23-year-old man who was beaten to death with a baseball bat wanted a judge to reduce her bond so that she could pay it with monies from her OnlyFans account.

Ashley Esselborn, age 21, pleaded with a Texas judge to reduce her $100,000 bond to $50,000, which she claimed she could cover with the funds in her risqué account.

Esselborn stated to the court that she had at least $8,000 in her account due to her nude images alone, but that all of her monies were locked and she has been contacting OnlyFans corporate to have access to them.

The waitress allegedly applauded as Payton Collier, 27, Ronnie Lang, 18, and William Bell, 28, beat Zachary Wood at his Wichita Falls house with their fists, feet, and a bat. All four were charged with first-degree murder.

OnlyFans model Ashley Esselborn appears in a pink bikini in the snow in a 2021 photograph.

Esselborn appears in court in Texas, where a judge denied her request for a lesser bond.

Esselborn is accused of being present at the murder of Zachary Wood, which police described as a “major bloodletting event,” which occurred in May of last year. She was charged with murder in the first degree.

The group allegedly attacked Wood because they believed he stole narcotics and money while they were staying at his residence.

Collier told police that in addition to cheering on the beating, Esselborn yelled at Wood and demanding to know where the stolen items were while Wood was being beaten.

In the spring, her bond was reduced from $1 million, but the judge declined her last plea for a reduction.

Zachary Wood, age 23, was beaten to death with a baseball bat in May because his attackers believed he had stolen narcotics and money from them.

Payton Collier, 27 (left) and Ronnie Lang, 18. Collier remains incarcerated and is currently serving a 50-year term for the September confession to Wood’s murder.

Uncertainty persists as to whether Esselborn participated in the assault or merely encouraged it.

She admitted to authorities that she was present during the incident and helped dispose of bloodied items afterward, and Collier confirmed that she remained on the sidelines.

Investigators claim that a witness overheard Esselborn boasting over the phone that she had not been caught and that she had participated in the attack on Wood.

In September, Lang pled guilty to the murder and is currently serving a 50-year term. Bell was released on bond of $200,000, while Lang remains incarcerated on bond of $500,000. Each remaining defendant was offered a plea bargain.