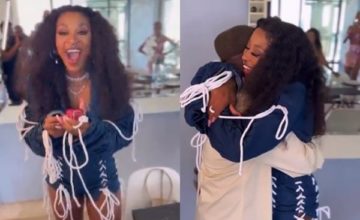 The former member of Black Mambazo is smitten with his DJ bride and wants the world to know it. He frequently publishes photographs of the couple’s intimate moments.

HOW DID MURDAHBONGZ SURPRISE DJ ZINHLE?
Fans and fans of the adorable couple were both envious and pleased to see that the Colours singer was happily married and adored by her husband.

Murdahbongz presented Zinhle with a new diamond ring that he had concealed behind a variety of exquisitely wrapped parcels.

In a web video, Mzansi’s favorite female DJ is seen opening a series of black and gold boxes before discovering a small red engagement box concealed within the last black box.

Her adoring husband surprised her by giving her a token of their union.

DJ Zinhle and her spouse Murdahbongz are in the honeymoon period of their relationship and cannot get enough of one other. Image via Instagram @djzinhle/ @Murdahbongz
DJ Zinhle blogs about her vacation to Zimbabwe with Morda.

MURDAHBONGZ AND ZINHLE GOT MARRIED: “TO MANY MORE YEARS OF SURPRISE”
According to The Citizen, the pair married in a private, traditional wedding in March of 2022.

The ceremony was kept secret and announced on DJ Zinhle: The Unexpected, the DJ’s reality show.

In the description of his post, the DJ stated,

“May 2023 be filled with more surprises and promises kept. Happy new year to everyone, and to my beloved.”

The delighted wife of Murdahbongz answered and said,

“How did I get so lucky? Such a considerate dude I love you.”

“YOU SAVED ME”: MURDAHBONGZ CONFESSES HIS UNDYING LOVE FOR HIS WIFE
Four days ago, on 30 December 2022, Zinhle’s spouse and the father of her second child, Asante, revealed in a love letter that he was saved by the beautiful DJ. He acknowledged that Zinhle was a continual source of inspiration and complimented her for being the “most incredible woman, mother, and wife.”

“How do I begin a dialogue with myself that I’ve been having since meeting you? Allow me to begin by stating that you rescued my life; you uncovered brightness within me that I was unaware existed…