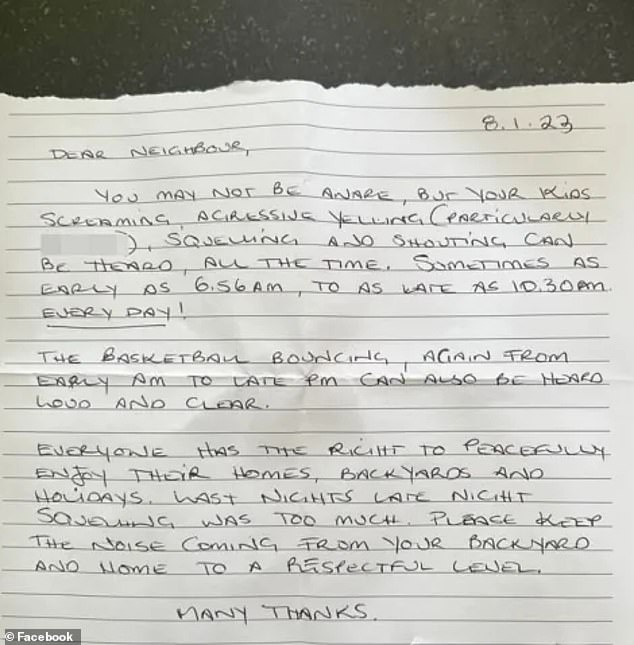 A mother’s sharing of a handwritten message from a neighbor complaining about her children’s excessive noise while playing in their backyard has divided opinion.

The Melbourne mother of three resorted to Facebook to seek advise from other parents on how to handle the situation.

Attached to the post in the Mums Of Boys Australia group was a photograph of the ‘Dear Neighbor’-addressed letter.

Your children’s screaming, angry yelling, shrieking, and shouting are constantly audible. You may not be aware of this. As early as 6.56 a.m. and as late as 10.30 p.m. Each day!’

A mother of three sent an image of a handwritten note from a neighbor to a mother’s support group on Facebook, seeking guidance on how to handle the matter.

The letter stated that the bouncing of basketballs could be heard from early morning till late afternoon.

Everyone has the right to enjoy their homes, backyards, and vacations in peace. The late-night shrieking from last night was excessive. Please limit the amount of noise originating from your backyard and residence.

In her post, the mother from Melbourne answered the allegations: “(The boys) wake up at 6:30 a.m. We leave for school and child care between 7:30 and 7:45 in the morning, as both my husband and I work all day.

She added, “So typically we’re trying to get them out of the house and into the car or on their bikes to head to school around this time.”

The mother informed Yahoo News Australia that her three young sons, aged 3, 5, and 7, are not the ones creating noise at 10:30 p.m.

Users of social media offered their opinions on the incident, with some expressing their support for the Melbourne mother.

One viewer noted that the scenario is “difficult to navigate,” while another reassured the mother that she “need not justify her children’s play.”

‘Occasionally as early as 6.56am! Another viewer added cheekily, “Karen, clutch your pearls tighter, can you imagine it’s already 6:54 am?”

However, several parents concurred with the letter’s tone, saying that “no one but you should have to deal with your children.”

One user commented, “Just because you have children does not give you the right to let them disturb others.”

Another concurred that having children did not make you “more entitled than anyone else.”

Another mother wrote that 7am may be “too early” for children to be out and causing noise.

She wrote, “Imagine if your neighbor’s dog barked that early every morning; it would become increasingly annoying.”

‘They sound like grumpy old farts, but perhaps they simply need an additional hour of sleep in the morning to get over their foul attitude towards children,’ the author suggests.

The Melbourne mother stated that she still believes that outside play at 7 a.m. is acceptable.

She stated that she will attempt to determine whose neighbor wrote the letter and approach them in a non-confrontational manner.

She stated, “If construction is permitted, there is loud traffic, etc., I’d much rather my children be outside than on a tablet/TV.”

She joked that in the future she will be “aware of those extra four minutes.”