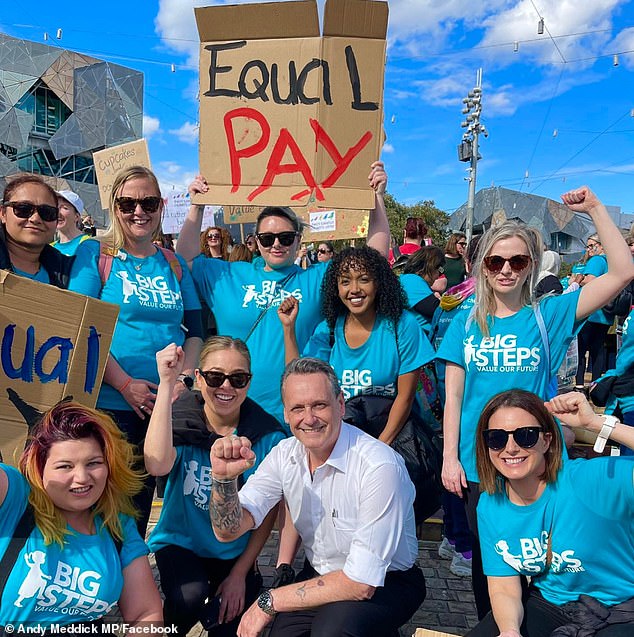 According to a cabinet minister, employees might secure a double-digit salary raise by persuading their employer to ignore wage rises occurring in comparable workplaces.

The Albanese government has introduced legislation containing broad reforms to employment laws, including the reinstatement of “multi-employer bargaining.”

Labor wants to implement a system in which wage increases in one workplace are replicated by several firms.

This would restore a labor relations system from forty years ago that resulted in enormous wage rises.

In 1993, a Labor administration enacted an enterprise bargaining structure to prevent salary increases from being automatically replicated.

‘So if you look at the Victorian child care centres that engaged in multi-employer negotiating together, it was complicated because the system wasn’t really set up for it, but they ended up with wage increases between 12 and 16 percent for those workers,’ he said on Wednesday’s 7.30 program on ABC.

Employer organizations are concerned that labor’s attempts to resurrect an industrial relations system that existed until 1983 will increase the frequency of strikes.

Former rugby union star and independent senator David Pocock is exploring a Labor plan that would exclude firms from the effects of new regulations for six to twelve months following the expiration of a single-employer enterprise agreement.

However, Senator Pocock desires further time to consider the bill.

“My concern has been and remains the limited amount of time we have to review and consult on the bill and the significant changes it makes,” he told the Daily Mail Australia.

“I acknowledge that this is an emergency, but we also need to get it properly.

The law is enormous and contains a number of commendable provisions, particularly in the areas of gender equality and wage growth, which will help alleviate the debilitating cost of living problem affecting Australians.

In August, he told 7.30 that there was another instance in Victoria where a large number of childcare centres, perhaps 70 of them, sought to bargain collectively.

In order to accomplish this, they had to register each contract individually.

The federal Labor administration introduced a bill in Parliament last month that would facilitate multi-employer bargaining in the workplace.

She stated, “We continue to feel that these changes would not result in greater wages and could, in fact, have unforeseen repercussions for employees and businesses, particularly small businesses.”

Sally McManus, secretary of the Australian Council of Trade Unions, has criticized the enterprise bargaining system, which was introduced in 1993 while Paul Keating was Labor prime minister, for preventing wage increases in one workplace from immediately flowing to others.

This replaced the previous method of industry-wide bargaining, which had led to a spiraling wage-price relationship.

In the early 1980s, extensive strikes resulted to a 14 percent increase in salaries as inflation rose 11 percent.

During a time when the average full-time male worker earned less than $300 per week, the Amalgamated Metal Workers Union was able to achieve a $39-per-week wage raise through strike action, which rippled throughout the economy.

In 2022, however, Australian workers continue to experience sluggish wage growth, with pay levels increasing by just 2.6% year-over-year through June while inflation surging by 6.1%.

Since then, price pressures have increased, with headline inflation increasing by 7.3% in the year leading up to September – the greatest increase since 1990.

The Treasury anticipates that salary growth will reach an 11-year high of 3.75 percent in 2023, but this level of pay increases is not likely to exceed inflation until 2024.