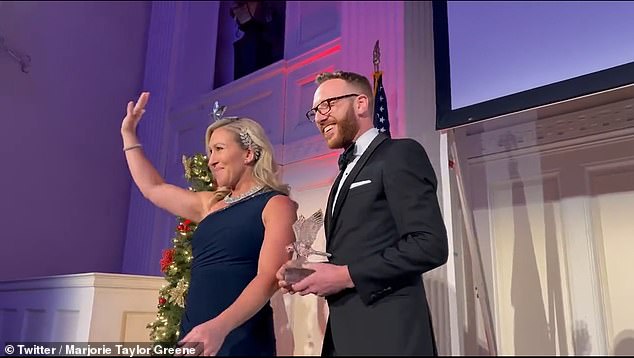 Among other things, Greene assured the jubilant throng that “we would have won” if she and Steve Bannon had planned the January 6 Capitol assault.

“I’ll tell you something, if Steve Bannon and I had planned it, we would have triumphed,” she said.

Not to mention, she said, we would have been armed.

One prominent MAGA Republican who attended the dinner was Greene, who wore a blue one-shouldered gown with diamond accents.

Greene spoke on current Republican initiatives in Congress, which would include a long list of agenda-driven issues after the GOP retakes control of the lower chamber on January 3. Greene was receiving an award at the event.

“I’m going to tell you I am fired up about 222 in the House after the previous two years of suffering under Nancy Pelosi and the Democrats and voting no consistently to Joe Biden and the Democrats communist agenda,” she stated.

The Georgia congresswoman’s committee responsibilities were removed not long after she arrived in Washington, DC. She has supported Republican Kevin McCarthy for the position of House Speaker and is probably looking forward to a period without the responsibility of holding that position.

She went on to say that getting all House Republicans to vote in unison is a task in and of itself, making reference to the continuing issue of party discipline, especially as the race for president in 2024 starts to take form.

Greene continues to steadfastly back former president Donald Trump, who declared his candidacy for reelection last month. Greene urged other Republicans to support Trump despite requests from a sizeable segment of the GOP to consider elsewhere for their choice for 2024.

During her speech, Greene also boasted about her persistent opposition to providing US cash to Ukraine, which is still engaged in a conflict with Russia that began over ten months ago.

She said that the tens of billions of dollars donated by US taxpayers to Ukraine would have been better spent tackling the country’s continuing problems with Mexican drug gangs who have set up shop along the US-Mexico border.

Although it seemed like Greene was adored and loved at the dinner, her comments were not well received online.

One non-fan tweeted, “I can’t wait to see you in jail.”

One user who claimed to be associated with a podcast on “mental, physical, spiritual,” and “financial” wellness blasted Greene’s looks. The user said, “I’ve seen males look better in an evening gown.”

One user responded to her remarks about Bannon and January 6 by writing, “Ummm that’s sedition…,”

In response, another person said, “At least you fascists are simply stating it out loud now and letting the rest of us know exactly what you are.”

Another account, labeled GOP Implosion Monitor, was perplexed by the notion that there would be any Republicans in very blue New York City.

He remarked, “The thought of young Republicans in NYC is funny.”