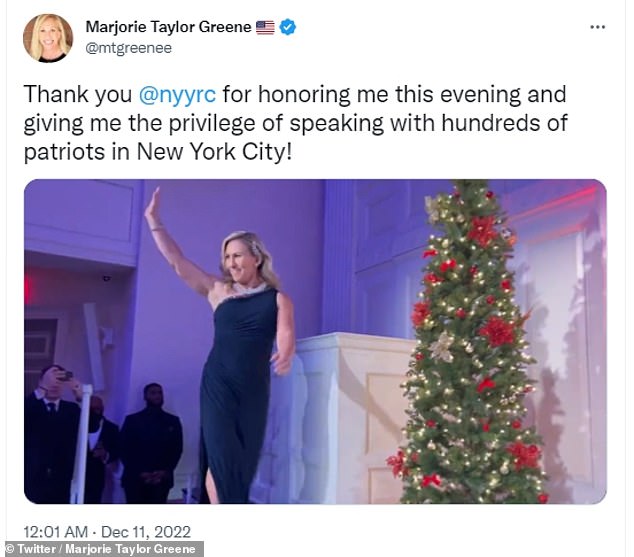 Greene told the jubilant throng, among other things, that if she and Steve Bannon had organized the January 6 Capitol breach, ‘we would have won’

If Steve Bannon and I had orchestrated that, we would have been victorious.

In addition, we would have been armed, she added.

Greene, wearing a jeweled one-shouldered navy gown, was one of several prominent MAGA Republicans to attend the dinner.

At the event, Greene discussed a variety of topics, including January 6, the upcoming 2024 presidential race, and GOP unity as the party prepares to regain control of the House of Representatives.

Greene, who was receiving an award at the reception, also discussed current Republican initiatives in Congress, which will include a laundry list of agenda-driven items when the GOP regains control of the House of Representatives on January 3.

She stated, “After two years of suffering under Nancy Pelosi and the Democrats and voting against Joe Biden and the communist agenda of the Democrats, I am fired up about House Resolution 222.”

Shortly after her arrival in Washington, the Georgia representative was relieved of her committee assignments. She has supported Republican Kevin McCarthy’s bid to become the next Speaker of the House and is presumably looking forward to a term without the responsibility.

She emphasized, however, that getting all House Republicans to vote together is a unique problem, alluding to the ongoing issue of internal party discipline, especially as the 2024 presidential field begins to take shape.

Greene continues to be an ardent supporter of former President Donald Trump, who began his re-election campaign last month. Greene pushed other Republicans to support Trump despite pleas from a sizable portion of the GOP to explore elsewhere for their 2024 contender.

During her speech, Greene also boasted about her refusal to send U.S. cash to Ukraine, which continues to confront Russia in a conflict that began nearly 10 months ago.

She said that the tens of billions of dollars donated to Ukraine by US taxpayers would have been better spent battling the US’s ongoing problems with Mexican drug cartels who have established operations along the US-Mexico border.

The notion of young Republicans in New York City is amusing.

Although Greene looked to be greeted with warmth and devotion at the gala, internet people were less enthusiastic with her comments.

On Twitter, a non-fan said, “I can’t wait to see you behind bars.”

One user responded to her remarks regarding Bannon and January 6 by writing, “Ummm that’s sedition…”

Another remarked, “At least you fascists are finally admitting it out loud and letting the rest of us know precisely what you are.”

Yet another account, this one headed GOP Implosion Monitor, appeared to be perplexed by the possibility that there would be any Republicans in New York City, which is overwhelmingly blue.

He wrote, “The notion of young Republicans in New York City is ludicrous.”