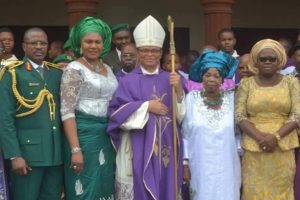 The wife of Anambra State Governor, Dr. (Mrs.) Ebelechukwu Obiano (Osodieme) has commiserated with the Aguiyi-Ironsi family of Ibeku Umuahia, Abia State over the passing on of Chief (Mrs.) Victoria Aguiyi-Ironsi, wife of the former Head of State of Nigeria, Major-General JTU Aguiyi-Ironsi.

In a condolence message released by Mr. Emeka Ozumba, Deputy Chief Press Secretary to Anambra State Governor, Mrs. Obiano mourned the passing on of Chief (Mrs.) Ironsi whom she described as a paragon of womanhood whom, instead of perpetually sulking over the nature and suddenness of the husband’s death in his youth, braced up to the daunting challenges of raising the family singlehandedly.

The Wife of Anambra State Governor commended the strong will of the late (Mrs.) Aguiyi-Ironsi which made her pull through the demands of raising her children responsibly; and her personal disciplinary observances that earned her the longevity she enjoyed.

Osodieme recalled with nostalgia her warm encounter with the late Mrs. Aguiyi-Ironsi  when she laid the wreath on behalf of Nigeria’s First Lady, Hajia Muhammadu Buhari, at the graveside of the former Head of State, Major-General JTU Aguiyi-Ironsi, in commemoration of 50 years of his demise.

Mrs. Obiano called on Women groups and governments of the day to duly recognize the fair attributes of the late iconic woman by raising monuments in her name as inspiration to the Nigerian woman. She equally  enjoined the Aguiyi-Ironsi family to ensure that the legacies of their matriarch lives on.

While praying for the repose of the soul of Chief (Mrs.) Aguiyi-Ironsi, Mrs. Obiano said that the amazon would be fondly remembered by all people of goodwill.