Consultancy company Cornwall Insight projected the price limit would reach £4,200 in January, up from £1,971 currently.

Families paying £100 in utilities now face $215 by January, and he appealed for swift action to prevent the ‘awful apocalyptic danger millions face this winter’ 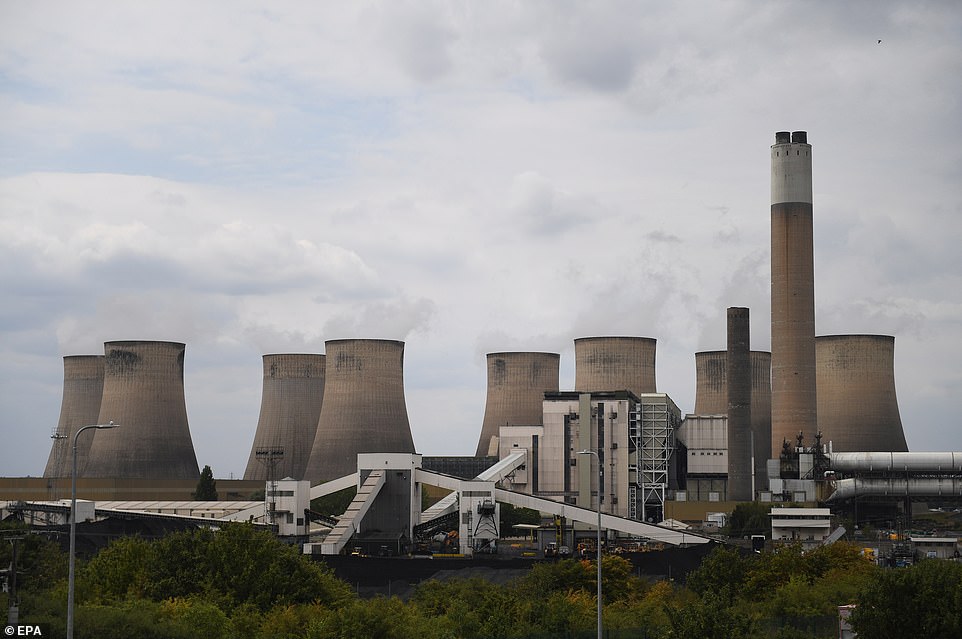 Mr Lewis told Radio 4’s Today show that Mr Sunak would need to treble his previous assistance package, particularly the lowest, from £1,200 to £2,400.

The Liz Truss proposal won’t assist the poor who choose between heating and feeding since they don’t pay tax.

‘This is a pandemic-level national problem.’ We’re seeing European hospital beds fill up and doing nothing.’

‘When the government presented its aid package earlier this year, it cost roughly £16billion, and since then we estimate energy costs to be about £500 more than predicted,’ he told Today. So we know how much help is required.

After Russia cut gas supplies in retaliation to western backing for Ukraine, European nations are trying to find enough for the winter.

Centrica, which owns British Gas, has signed a 15-year contract to import LNG from the US.

The business will acquire a million tonnes per year from the Delfin Deepwater Port off the coast of Louisiana starting in 2026.

In a’reasonable worst-case scenario,’ the UK might see a sixth of peak power consumption this winter, according to Business Department plans.

Blackouts are planned. Railways are one of the top energy consumers, therefore rationing might affect train services.

The debt has accumulated while families should be accumulating credit for the winter. Uswitch says 8m homes have no credit.

Emma, a mother from Kent, said she paid off a ‘good percentage’ of her arrears but won’t pay the total sum before winter.

She told Today, ‘Winter will be challenging.’

I hoped we wouldn’t need a food bank with both of us working full time. Many families will suffer. I’m terrified.

The stunning depth of Britain’s energy problem has led to proposals for a’social tariff’ to support poorer homes, although this would increase rates for ordinary people.

Derek Likorish, head of Utilita and former chair of the UK Government’s Fuel Poverty Advisory Group, stated, ‘The situation is severe and I’m shocked the two candidates for Prime Minister don’t come up with a clear unity of purpose and start straightening it out.

‘We need a social tariff to support the poor.’ We must boost consumer assistance this winter.

When asked whether he supported the #don’tpay movement, he answered, ‘I don’t advocate it.’ It’ll give them issues, but I understand why they’re doing it.

The 25% windfall tax on energy companies’ earnings is reported to be increased following corporations’ rising profits this month.

Former Chancellor Rishi Sunak said in May that firms like BP would be subject to a 25% fee to generate roughly £5billion a year. This is due to be raised further in light of mounting worries over how millions of households will manage to heat their homes in the coming months.

Treasury source: ‘If you look back at what these corporations were anticipated to produce and what they really brought in, it was above their wildest hopes.’ We’re exploring ways to increase profitability.’

The new ‘full fat’ windfall tax would remove loopholes in the planned energy earnings taxes, which may collect $5bn.

Theresa Villiers, who is endorsing Mr Sunak for leader, said today that although ‘no government can shelter everyone’ from growing energy costs, Mr Sunak ‘clearly recognises that we need to do more’

Rishi recognises that we need to do more and has suggested suspending VAT on energy bills.

As the government prepares for winter, a’reasonable worst-case scenario’ suggests electrical capacity might fall short by a sixth of peak demand.

Bloomberg claims to have talked to a person familiar with the government’s thinking, who said this scenario is unlikely.

If blackouts are implemented, electricity costs may reach £4,000 as Ofgem’s price restriction doubles.

When asked whether Britons can expect electricity shortages this winter, Education Secretary James Cleverly claimed the UK is ‘in a better position than many’ but ‘it won’t be easy’

‘We’re in a worldwide economy, a global energy industry, and the things that touch us affect everyone across the globe,’ he told Sky News.

‘Our domestic energy output is better than many, so we can get through this.’

It won’t be easy, but we’re resourceful, robust, and nimble, as we proved with Covid.

Stopping gas to power plants would cause blackouts, evoking the 1970s.

The Department for Business, Energy and Industrial Strategy has reportedly highlighted worries about electricity supplies this winter.

Under its contingency plans, energy might be rationed, leading to the temporary shutdown of railway lines, libraries, and other government facilities.

Despite emergency coal power plants and the reopening of Britain’s largest gas storage station at Rough, the UK might depend on imports from the EU and Norway.

Norway recently said it was considering curtailing energy exports to avert blackouts in its own nation this winter, while France’s nuclear system, which regularly exports electricity, only has half its power reactors operational owing to maintenance and repair concerns.

The UK transported record volumes of gas to Europe during the Russian invasion of Ukraine to shore up supply. European countries may be eager to aid with gas and energy supplies.

We are not dependent on Russian energy imports, unlike Europe, thanks to our North Sea gas reserves, steady imports from reliable partners, the second largest LNG port infrastructure in Europe, and robust legal contracts, so households, businesses, and industry can be confident they will get the electricity and gas they need.

Boris Johnson’s successor, Liz Truss or Rishi Sunak, might face an energy crisis in their first few months in office, in addition to the existing cost-of-living problem, which has seen energy prices soar.

Cornwall Insight predicts costs will rise to £3,582 in October from $1,971 now, then rise further in the new year.

In the three months commencing in January, Ofgem will restrict average household prices at £4,266.

If elected, Mr. Sunak will extend the assistance package he introduced earlier this year, which provided every family £400 off their energy costs and those on means-tested benefits an additional £650.

Ms Truss said she doesn’t believe in taxing people to the highest level in 70 years and then handing them their own money.

I will first explore efficiency savings throughout Whitehall to benefit families directly in this unusual circumstance.’

He said greater borrowing was foolish and inflationary three weeks ago. Hesitant? It’s a massive U-turn.

Our price cap expectations have been slowly climbing since the summer 2022 limit was established in April, but a £650 rise in January predictions is a new shock, said Cornwall Insight’s Craig Lowrey.

As more individuals experience fuel poverty, the cost-of-living problem will only worsen.

Many may view Ofgem’s revisions to the hedging formula foolish at a time when so many people are suffering.

He supported Ofgem’s decision, which should lead to cheaper bills next year.

Ofgem makes it simpler for energy providers to recoup expenses. By doing so, fewer suppliers will fail, and consumers won’t bear the burden.

Maintaining the existing timetable for suppliers to recoup their hedging costs might risk a repetition of the 2021 exodus, Mr. Lowrey warned.

Given that consumers pay for supplier failure through their energy bills, a change that reduces this risk is welcome, even if the timing isn’t.

The government has offered £400 per home and increased aid for the disadvantaged.

The government must increase funding in the first two quarters of 2023.

Long-term, Cornwall Insight has advocated a social tariff or other assistance system to target the most vulnerable.

The existing price ceiling hurts consumers, suppliers, and the economy.

Ms Truss was accused of penning a ‘electoral death note’ with her economic reform ideas.

Her plan to slash taxes as soon as she gets office to combat inflation and the cost of living might leave the Tories in ‘impotent opposition,’ he warned.

Fewer than 20% of respondents wanted tax cuts, according to a poll yesterday.

Ms Truss’ campaign said Mr Sunak was running on a ‘Labour economic ticket’ that would cause a recession.

A new survey suggests Ms Truss is the greatest candidate to overcome Labour, with respondents preferring him to Keir Starmer.

Tonight in Darlington, the two leadership hopefuls square off in ex-Labour constituencies in the North and Midlands.

The Bank of England warned last week of a five-quarter recession and 13% inflation later this year.

Mark Harper, a Sunak supporter, said no relief for struggling families will be considered until the new Tory leader enters power next month.

Boris Johnson has declined to interfere before leaving No10 despite calls from Gordon Brown to meet with both contenders.