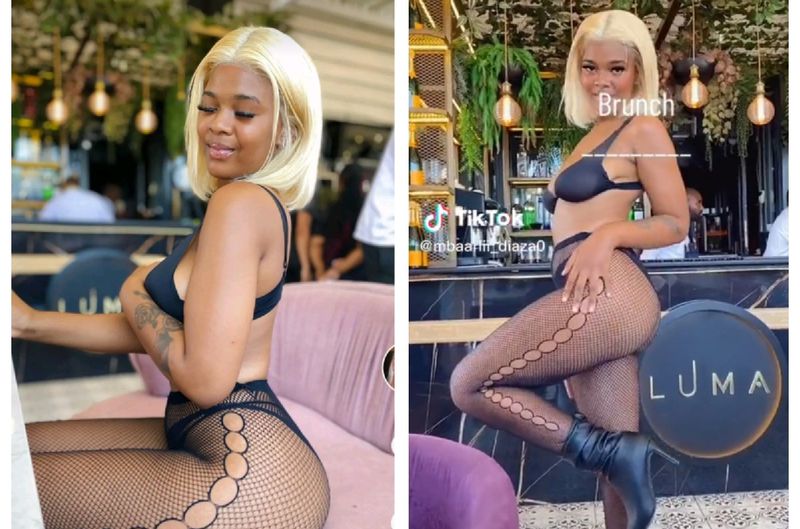 More and more Ama2000s appear to be imitating Limpopo’s Queen Minaj, an Ama2000 woman who has made headlines for her unorthodox and scandalous butt-baring attire in public.

A video of another half-naked Ama2000, whose TikTok username is @mbaarliii diaza0, has gone viral and generated controversy.

The video, which the Generation Z social media user posted on her TikTok account, shows her wearing nothing but a bra, thong, and fishnet stockings while having breakfast with her friends at Luma, a nearby restaurant.

Just days before diaza0’s video, Ama2000’s social media influencer was photographed posing in a pink thong while holding a KFC bag inside a fast food restaurant.

Due to her jaw-dropping ensembles, Queen Minaj is no stranger to bringing shopping centres and entertainment venues to a halt.

A clip of her wearing her distinctive long pink braids, a denim jacket, and extremely tight denim ripped pants at a mall in Limpopo was one of her most popular videos.

Queen Minaj captured the attention of clients, who followed her around while laughing and taking photographs and videos of her.

Following the Ama2000 TikToker’s video, Twitter users had much to say as they questioned whether her attire was proper for a restaurant.

She has bad untrustworthy friends. The restaurant must enforce a strict dress code; else, their reputation as a family restaurant would be tarnished. People must be arrested for public lewdness,” @Ziie Radebe wrote.

“Are there no children at this business? Wallahi, our civilization is complete,” stated @certifiedthato.

“The quotes regarding agency and freedom of dress code in the comments are a concern I have with some liberal ideas. Since we believe in free will and bodily autonomy, we must likewise believe in public decency; there is no room for subtlety. We must constantly overlook context,” @Chant ella published.

While @chantel hlo stated, “We must at some point draw the line. And I am aware that some may argue “people should wear whatever they want.” But No, it is not adorable.”