Skip to content
Home » News » News » Mother, 27, and boyfriend, 38, forced girls as young as eight to watch them have sex 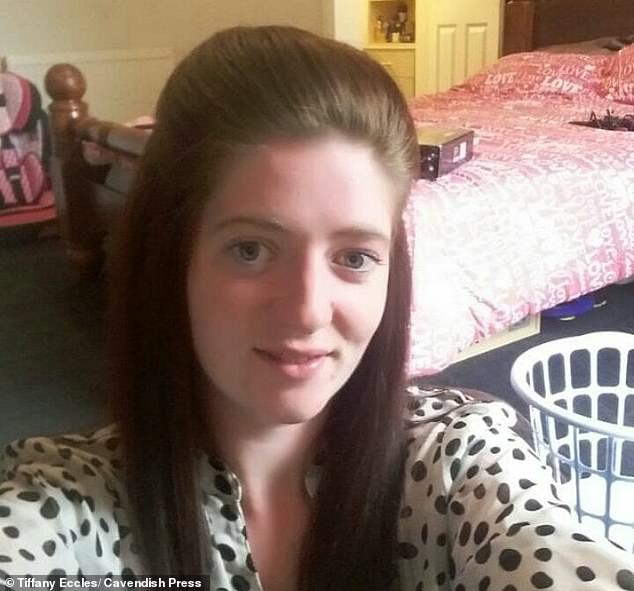 mother-of-one and her rapist boyfriend have been jailed for a total of 26 years over sickening sexual abuse they inflicted upon two young girls.

Tiffany Eccles, 27, and John Mills, 38, forced their victims to watch them have sex ‘as a demonstration’ before Mills raped both girls on separate occasions telling one to keep it their ‘little secret’. mother-of-one and her rapist boyfriend have been jailed for a total of 26 years over sickening sexual abuse they inflicted upon two young girls.

Tiffany Eccles, 27, and John Mills, 38, forced their victims to watch them have sex ‘as a demonstration’ before Mills raped both girls on separate occasions telling one to keep it their ‘little secret’.She was just eight years old and stayed in the same tent as the defendants,’ he told Minshull Street Crown Court.

‘He began touching her and she tried to get out of the tent he pulled his hand over her face saying: “Shh! don’t do that”.

‘She was shouting for her father but he didn’t hear as he was asleep. He told her not to tell anyone saying it was their “little secret”.

‘She knew it was wrong but was too frightened to tell anyone as she was fearful she would get into trouble. Eccles was present at the time but was asleep.

‘The offending escalated when he took her to a shop in his car and he bought condoms. As they were coming back, he turned down a country road and told her to lie down in the back of his car and he raped her.

‘Another car containing teenage boys arrived on the lane but they thought she was older than she actually was and Mills drove away.’

In one incident, Mills raped the girl whilst Eccles was in another bedroom aware of what was happening. He also raped her on a sofa at his home.

‘On one occasions she was told she had to stay with Eccles until Mills got back from work,’ said Mr Close.

Landscape gardener Mills (right), of Bury, Greater Manchester raped the first victim at least five times and made her watch him and Eccles (left) have intercourse. The sick group sex sessions involved them playing a game of spin the bottle whilst nakedhen he got back they went to a bedroom where they were all naked and they played Spin the Bottle.

‘Eccles and the girl engaged in sex acts whilst he watched before joining in. The girl recalls how Mills made her watch him and Eccles have sex saying: “watch this”. She felt disgusted. She said Mills was manipulative saying saying there would be lots of girls her age who liked these things.

‘She said he was like two different people, one hand being friendly then on the other being totally different.’

As Eccles and Mills were locked up for a total of more than 26 years, relatives of the youngsters burst into applause in the public gallery and shouted: ‘You filthy scumbags – hope you f**king rot.’

Police examined Mills’ phone and also discovered he had filmed Eccles having sex with another man. Another victim came forward to a teacher in school after she learned of the arrest. It emerged that their ordeals only came to an end when Covid-19 lockdown restrictions prevented them from meeting.

The court heard the second girl told police how Eccles stripped off at a house whilst Mills watched and then told the youngster to get undressed whilst they play a ‘game.’

Eccles then had sex with Mills in front of the girl as a ‘demonstration.’

During the hearing the mothers of both girls also gave emotion-charged statements detailing their heartbreak over the victim’s ordeals.

In mitigation for Eccles, Anna Chestnutt said her client had started dating Mills when she was 18 and added: ‘The offending was only ever instigated by Mills and she acted under his direction.

‘She suffered a campaign of emotional abuse and manipulation at his hands. He demeaned her and left her trapped and in fear of him. He would threaten to leave her if she did not comply with his demands.’

In a letter to the court Mills said: ‘I know I caused a great deal of trauma, hurt and pain to a great many people. I can’t take back what I have done and make it right but I wish I could.

‘I didn’t think about my actions at the time but I realise I have torn lives apart and innocent people now suffer for what I have done. I hope they will eventually find peace.’

Mills held his head in his hands whilst Eccles wept as Judge Bernadette Baxter said: ‘There was literally nowhere that was a sanctuary for these defenceless children when they were with you.

‘This vile behaviour was committed over a number of years and the victim’s statements make clear the dreadful and long-lasting impact your depravity has had on them.

‘You have affected their confidence, their self esteem, their ability to form trusting relationships, their mental health and even their will to continue living. Your behaviour will live with them long after any sentence I pass expires.’

Eccles and Mills were also ordered to sign the Sex Offender Register and abide by an indefinite Sexual Harm Prevention Order. Both were barred from contacting the girls under the terms of a restraining order.

Following Mills’ release from jail he will be on licence until 2043 under the terms of an extended sentence.