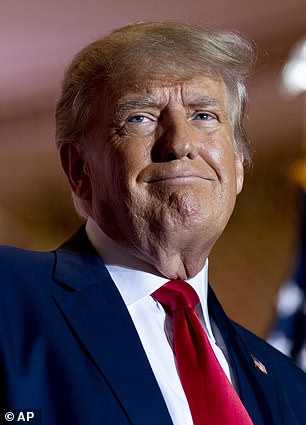 An early election survey released on Tuesday indicated that Florida Governor Ron DeSantis is quickly establishing himself as a top 2024 presidential candidate who may defeat both Donald Trump and President Joe Biden.

Despite having announced his own third White House bid last month, the latest USA Today/Suffolk University poll reveals that the majority of GOP supporters want Trump to hand the reins to the 44-year-old Republican governor.

And although the former president would lose to Biden in a hypothetical head-to-head rematch, DeSantis has a slim four-point advantage over the Democrat.

After barely beating Democrat Andrew Gillum in 2018, the Florida governor just won a second term with a double-digit margin in the 2022 midterm elections.

As a vociferous opponent of the Democratic president’s policies throughout the latter two years of the Biden administration, he saw his national GOP name soar.

His anti-LGBTQ law, branded “Don’t Say Gay,” has also drawn criticism. He also declared war on Disney for doing so, and in a show of defiance regarding the border situation, he moved an aircraft load of migrants from Venezuela from Texas to Martha’s Vineyard.

According to a survey released on Tuesday, 65% of Republicans and voters who identify as conservatives want DeSantis to run for president in 2024, while fewer than 25% indicated they don’t.

In contrast, Trump got the support of 60% of GOP voters who wanted him to run a third time. As of Tuesday, just 47% of Americans want him to do it now that he has.

In contrast, just 45% of GOP voters stated they supported his candidacy.

DeSantis hasn’t explicitly said he’ll run for president in 2024; instead, he’s said he’s focused on Florida. Nevertheless, the ex-president is enraged by DeSantis’ failure to rule out a GOP primary challenge to Trump.

In that fictitious scenario, the governor received 56 percent of the vote against Trump’s 33 percent, a huge 23-point advantage for DeSantis.

DeSantis is anticipated to have a tighter contest against Biden.

Although no possible contender receives a majority, DeSantis managed to gain a slim advantage of 47 points. At 43%, Biden’s popularity began to wane.

The advantage is comparable to what the president-elect would have against Trump in a rematch in 2024.

According to the survey, among all likely voters, Biden has support of 47%, while Trump is in second place with 40%.

On the following election day, both would be more than three decades older than DeSantis.

Despite worries about his age, the president has made it clear that he wants to run for a second term. However, he has not yet officially begun his campaign.

Democrats’ support for his doing so has decreased by 5 points, from 45 percent in October to 40 percent presently, according to the USA Today poll.

Only 23% of respondents to the whole poll want Biden to run for president once again.

Similar resistance to Trump is seen inside his own party.

A 61 percent majority of Republican and GOP-leaning people said the pollsters they preferred someone else to serve as the de facto party head and continue advocating Trump’s agenda.

One-third of respondents wished for him to run independently.

It happens as Trump deals with growing legal difficulties that he was mainly able to sidestep while in office.

Recent findings in a lawsuit filed by the Manhattan District Attorney’s Office found his corporation guilty of tax evasion.

The FBI’s investigation into the classified documents seized from Trump’s Mar-a-Lago mansion in Florida was effectively delayed by a previous order from a US District Judge in Florida, which was lifted on Monday. This opened the door for investigators to look into whether Trump handled any presidential files improperly.

»Most GOP voters want DeSantis to run in 2024, defeating Trump and Biden«