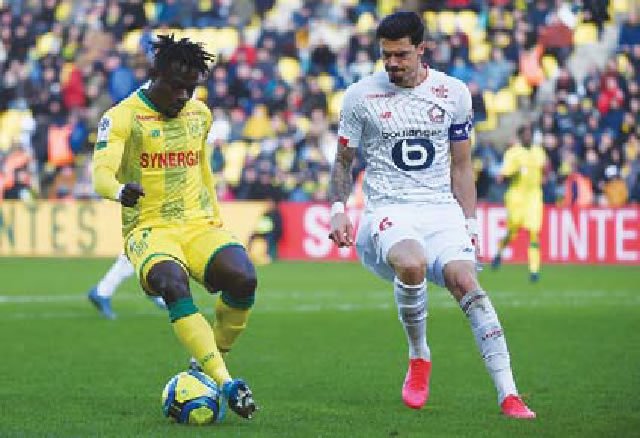 Moses Simon’s impressive display against RC Lens at the Stade Bollaert-Delelis on match-day 35 of the French Ligue 1 on Saturday has earned him a place in L’Equipe’s Team of The Week.

The Nigerian international grabbed a brace to help Nantes secure a 2-2 draw away from home.

Simon put Nantes in front in the eighth minute after being teed up by Marcos Coco, before scoring in the second 32nd minute of the encounter.

The goals were Simon’s fifth and sixth in the league.

He has also contributed eight assists from 29 matches.

According to Ligue 1 statistics, the Nigerian became the first Canaries player to be involved in more than 10 goals in three consecutive seasons in the competition since the late Emiliano Sala achieved the feat between 2016/17 and 2018/19 campaigns.

Nantes on their official Twitter handle confirmed that the winger was named in L’Equipe’s Team of the Week alongside a teammate, Marcus Mawkus.

“Very prominent on Saturday during the draw obtained in Lens, @Simon27Moses and @MarcusMawkus obtain respectively the score of 8 and 7 by the sports daily,” the club tweeted.

Nantes has nominated the Super Eagles star – alongside two others – for the player of the month award, following his brilliant performances across April.
Simon grabbed three goals and an assist in five Ligue 1 matches in the month under review.