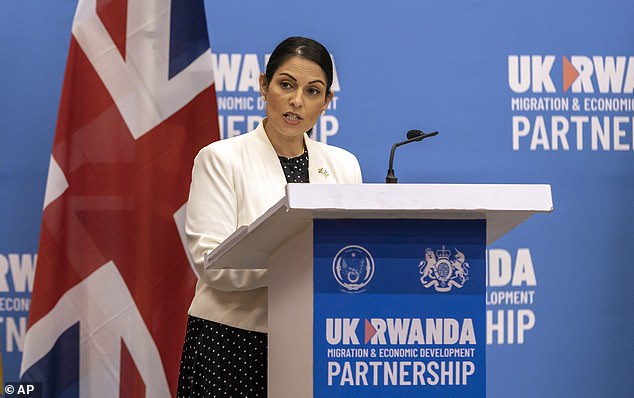 More migrants have arrived in the UK today, despite the risk of being deported to Rwanda – as Priti Patel slams ‘synthetic outrage’ at the plans.

The Government announced this week it plans to provide failed asylum seekers, including those crossing the Channel in small boats, with a one-way ticket to the African country, where they will have the right to apply to live permanently in the UK.

But a boat with around 20 migrants on board was brought ashore into Dover, Kent, on Easter Sunday after being intercepted by Border Force officers.

Men, women and young children were all wearing lifejackets as they were brought into the port this morning to be processed.

Windy conditions in the Channel are expected to prevent large numbers attempting the treacherous crossing today.

It comes a day after the Royal Navy and Border Force intercepted a further 252 migrants attempting to make the treacherous journey.

Despite choppy conditions in the 21-mile wide Dover Straits, seven flimsy dinghies made the dangerous voyage and were rescued in British waters.

As of Saturday, the latest figures now mean 6,263 migrants have already been detained so far this year in 193 small boats.