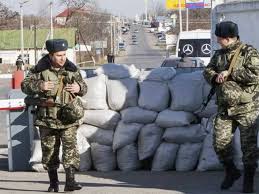 Moldova on Thursday accused Russia’s army of trying to ‘recruit’ Moldovan citizens, days after British military intelligence said that Moscow was trying to replenish its forces in Ukraine by recruiting in the breakaway Transdniestria region.

Transdniestria is a narrow strip of land held by pro-Russian separatists that runs along the east of Moldova and comes to within about 25 miles, 40 km, of the Ukrainian port of Odesa.

“Such actions do not promote peace for all of us, our fellow citizens, for our families. Such things are very dangerous and they must be stopped,” Moldovan Foreign Minister Nicu Popescu said.

He did not give further details but said that Moldovan foreign ministry officials regularly met Russia’s ambassador and that Moldova’s position on the matter was crystal clear.

Moscow’s foreign ministry did not immediately respond to a request for comment. Reuters was not able to immediately verify whether Russia’s army has been trying to recruit Moldovans.

Separately on Thursday, Ukrainian Deputy Defence Minister, Hanna Malyar said that Russia was massing troops in several areas including Transdniestria for a “further escalation” in Ukraine.

Moldova said last month that it was monitoring the situation in Transdniestria, where an estimated 1,500 Russian troops are based, but that it had not seen significant changes since Russia’s invasion of Ukraine started on Feb. 24.

Transdniestria’s authorities denied on Monday Russia was conducting any military preparations on its territory that threatened Ukraine. The region’s foreign ministry did not immediately respond to a request for comment on Thursday about the remarks by Ukraine’s Malyar.

Moscow calls its actions in Ukraine a “special operation” to destroy Ukraine’s military capabilities and root out what it views as dangerous nationalists, but Ukraine and the West say Russia launched an unprovoked war of aggression.