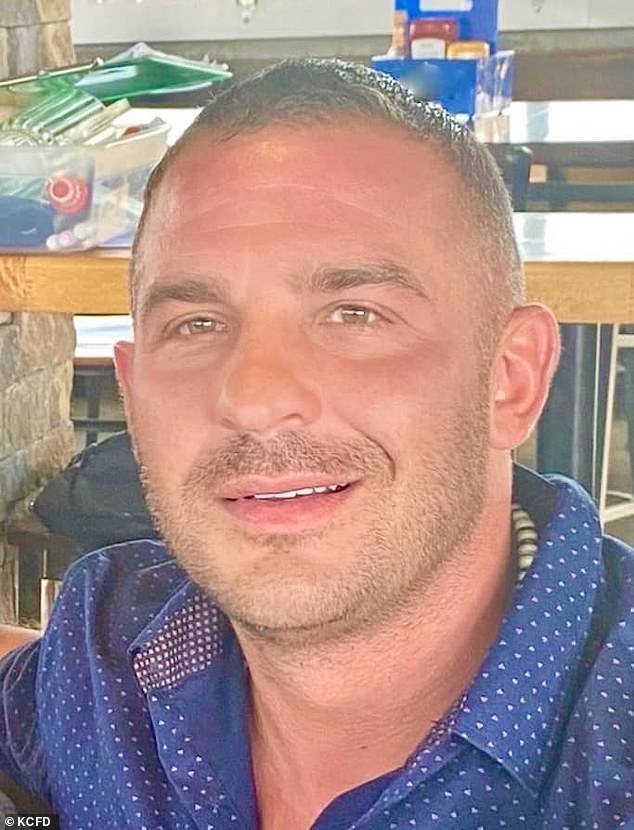 Prosecutors in Missouri have determined that the woman who shot and killed an off-duty firefighter who was brawling on the ground with her boyfriend would not face prosecution after determining that her actions were justifiable.

Anthony ‘Tony’ Santi, 41, passed away on October 6 in front of a petrol station and liquor shop in Independence, Missouri, a suburb of Kansas City.

He was shot in the back by an unidentified woman at 2:30 p.m. while struggling her partner.

Tuesday, the Jackson County Prosecutor’s Office announced that the woman will not be prosecuted.

They found that they were unable to prove beyond a reasonable doubt that she violated Missouri law by shooting and killing Santi.

The prosecutor’s office released the following statement to The Star: ‘We mourn with the family and community over the tragic loss of Mr. Santi.’

“Missouri law, specifically self-defense and defense of others, controls this case, leading us to drop charges after a thorough review.”

FOX4 showed the video to a 40-year-old Missouri attorney who authored the state’s handbook on guns and self-defense.

Technically, it is known as the defense of justification, and your justification is that you are saving another person’s life, according to Missouri Weapons and Self-Defense Law author Kevin Jamison.

The event began when the woman’s 23-year-old boyfriend visited a service station to purchase cigars.

Taylor was asked to leave by the gas station cashier after she informed him that she did not have the item he requested.

Santi, who was off-duty at the time and present in the store, stepped in to assist the cashier and requested Taylor to leave.

The duo engaged in an altercation, which continued outside.

In the forecourt, the two were fighting on the ground.

A Kansas City woman who defended her boyfriend after a confrontation with a firefighter was released from custody today. The young woman subsequently killed the firefighter in self-defense, it has been declared. http://twitpic.com/tuxV15oTC1

A bystander’s video captures Santi, a white man, dominating Taylor, a thin black man, who writhes on the ground.

Taylor’s girlfriend may be seen in the video recording yelling “Stop!”

Taylor gives her a gun from his pocket at one point, and she accepts it.

Taylor, a felon convicted of armed robbery in May 2019, was prohibited from carrying a firearm.

“Stop!” she yells at Santi as he attempts to place a headlock on Taylor. ‘Let him go! The children are in the car! You’re murdering him!’

The woman then fires at Santi, striking him in the back.

The Kansas City Fire Department expressed shock and sorrow at the passing of Santi, the father of Jillian Santi and a lifetime Kansas City native who joined the department in 2011.

As a close-knit organization, we are stunned by FF Santi’s untimely death yesterday, and my condolences go out to his family and friends,’ said Fire Chief Donna Lake.

His obituary stated that as a firefighter and EMT, he was “committed to assisting people through his position.”

His daughter was ‘the light of his life,’ and he had a deep appreciation for the outdoors and wildlife.