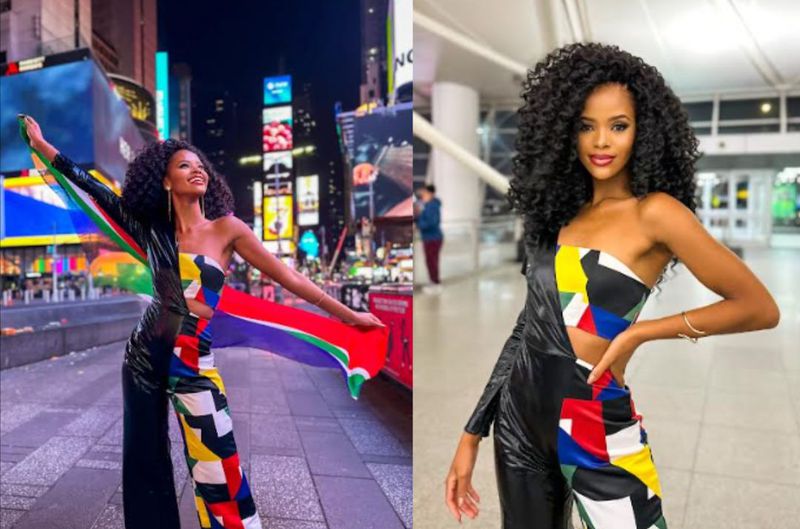 Miss South Africa Ndavi Nokeri is a “hot favorite” for Miss Universe, which will telecast on DStv on January 15th.

Social media polls indicate that Ndavi Nokeri, a native of Limpopo, is one of the frontrunners at this year’s Miss Universe competition.

Fans and supporters of Miss Universe consider the reigning South African queen to be one of the front-runners, according to online sites such as Philstar.com, Missology, and Miss Universe Predictions.

The current buildup to the finals is preparation time, when participants are put through their paces and are required to engage in a number of events. One of these was the shoot for Muba Cosmetics.

According to the official Miss Universe news source, Pageant Circle, Miss South Africa was one of five contestants selected to participate in a special photo shoot for the official makeup sponsor.

Alongside the contestants are images of Nokeri that are gloriously bronzed:

“It has been a pleasure to meet my fellow contestants in person and get to know them. My preparations are on schedule, and I am working diligently. According to the Miss SA organization, she stated, “Zozi (Tunzi) has given me advice that I have taken to heart: to be self-assured and true to myself.”

“I also appreciate the wonderful support from all South Africans – I will be flying the flag high when I walk onto the Miss Universe stage, just as I did when I entered the Miss South Africa competition.”

The Miss Universe finale takes place in the United States on Sunday, January 15, and will be shown live on 1 Magic (DStv Channel 103) beginning at 03:00 on Monday, January 16.

Miss Universe 2022 will be the pageant’s 71st edition. Louisiana’s New Orleans Morial Convention Center hosts the competition. At the conclusion of the event, reigning Miss Universe Harnaaz Sandhu of India will crown her successor.

The tournament will be hosted by Jeannie Mai and Olivia Culpo, Miss Universe 2012, and will feature contestants from 84 countries.

Mai is an American television personality and stylist who most recently acted as a backstage correspondent at the 2014 Miss Universe competition. She is well recognized for her work on the makeover show How Do I Look? Culpo served as host for the last time during Miss Universe 2020.

Catriona Gray, the 2018 Miss Universe, and Zuri Hall, an entertainment reporter, will act as backstage correspondents. This will be the first edition of the pageant staged under the management of the Thailand-based JKN Global Group, which last year purchased the Miss Universe Organization rights from WME/IMG.