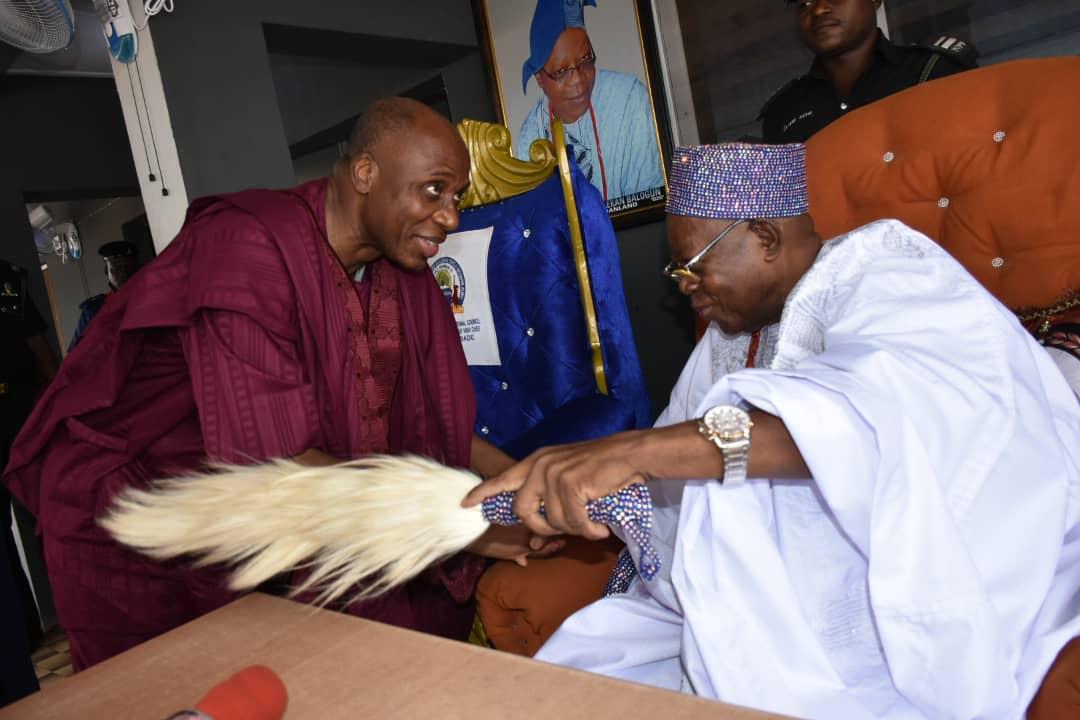 The Minister of Transportation, Rotimi Amaechi, has underscored the importance of the role of traditional rulers in Nigeria, in tackling insecurity in the country.

The former Rivers State governor stated this on Monday, at the palace of the Olubadan of Ibadanland, Oba Lekan Balogun, when he paid a consultation visit to the monarch at the Alarere, Ibadan Palace, in pursuit of his presidential ambition, come 2023.

Amaechi said he may be young among the aspirants for the party ticket, he has loads of experience from different political levels and stages, as he is the only aspirant that has governed a state with insecurity challenges and turned it around, disclosing that he does not belong to any geo-political bloc, as far as his presidential ambition is concerned.
The minister noted: “I’m not Hausa/Fulani candidate, I’m not Yoruba candidate, I’m not Igbo candidate and I’m not even the Kalabari candidate, but a Nigeria candidate.

I come with experience having been two-term Speaker before becoming the state Governor for two terms during which I also served as the Chairman of the Governors’ Forum, also for two terms.”

He assured that as President, he would tackle insecurity and work with the National Assembly to put traditional rulers in the constitution so they would have roles to play in the security of the country at state and local government levels, noting that people know all the criminals in their neighborhood and traditional rulers have roles to play to put them under check.

Amaechi revealed that he was able to turn things around in Rivers State and made it a safe haven for both people and businessess, while he was governor, through creating alternative to criminality by ensuring that people were engaged towards ministering to their welfare.

“As a firm believer in the Nigerian project, my cabinet as the state Governor had a sizable number of non-indigenes as members. Two Permanent Secretaries were non-natives of Rivers State to demonstrate my detribalised nature. If by the grace of God I become the President of this country, I possess all what it takes to make Nigeria better,” the presidential aspirant said.

Following requests made by the President-General of the Central Council of Ibadan Indigenes (CCII), Prince Oluyemisi Adeaga and Sen. Kola Balogun, Amaechi promised that a railway station, not within Ibadan railway corridor, would be named after an Ibadan indigene and that the final approval for the commencement of the Dry-Port project in Ibadan, would be sought and got from the Federal Executive Council before the end of May, 2022.
Oba Balogun eulogised Amaechi’s detribalised nature, saying with people like him, Nigeria would be a better country.

The monarch, who said the former governor shares the same attribute on oneness of Nigeria with him, harped on the unity of the country, stressing that: “Irrespective of language, tribe or religion, we are all brothers and sisters”. The Honourable Minister has over the years proved to be a true Nigerian “and this falls in line with my belief and activities all through my life.”

To the entourage of the presidential hopeful which, included former and serving senators, and other political bigwigs, the Olubadan said: “I urge you all to support and encourage him. He has demonstrated the capacity to wedge the country together and I want to tell you that you are very much at home. Feel free to knock at my door anytime.”