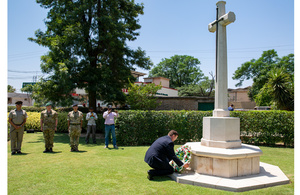 Minister James Heappey will be meeting senior government and military leaders, discussing the impact of the war in Ukraine across the world and UK’s humanitarian response in Afghanistan. He also laid a wreath at the War Cemetery in Rawalpindi where hundreds of Commonwealth soldiers who lost their lives in the two World Wars are laid to rest.

The last ministerial visit to Pakistan was in September when the then Foreign Secretary Dominic Raab held high-level meetings and discussed how the two countries can work closely together on the situation in Afghanistan.

The UK and Pakistan are close friends and partners. As we celebrate 75 years of our bilateral relationship, it is more important than ever that we continue to work together in an increasingly unstable world to tackle challenges and those who threaten global peace and security.

Notes to editors:
James Heappey was elected as the Member of Parliament for the Wells Constituency in May 2015. Before entering politics, James served in the Army reaching the rank of Major. In a 10 year career in the Rifles, James served on operations in Kabul in 2005, Northern Ireland in 2006, Basra in 2007 and Sangin in Helmand Province in 2009. He also served in Kenya and across the United Kingdom. James was appointed Minister for Defence Procurement on 16 December 2019, having previously served as Parliamentary Private Secretary to the Prime Minister.

The UK has now disbursed the full £286 million of UK aid for the financial year 2021-22 to Afghanistan and for Afghan refugees in the region to address the most urgent humanitarian needs.

On 31 March 2022, the UK co-hosted a high-level UN humanitarian pledging summit, alongside Germany and Qatar, that helped raised $2.4 billion for the UN’s Afghanistan appeal. This will reach millions of people with emergency support for health, protection, shelter, food, livelihood, and education. Some donors also announced funding for essential basic services, which will support the delivery of education, sustain health care systems, and support community resilience.