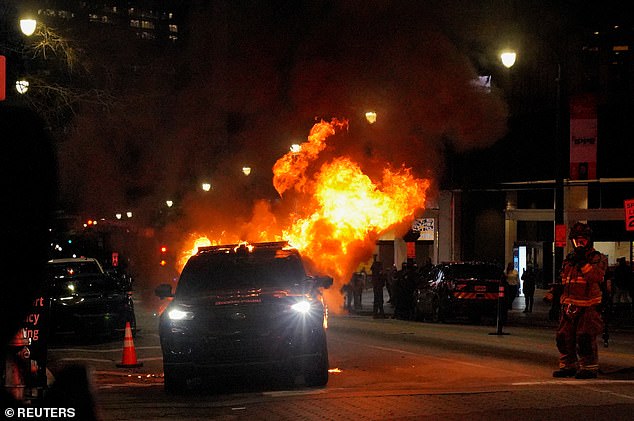 Due to his participation in the violent Antifa demonstrations that took place in Atlanta on Saturday, the son of a billionaire physician has been charged with domestic terrorism for the second time in a month.

One of six persons accused after rioting over the death of a protester who reportedly shot a police officer is Francis “Frankie” Carroll, 22, of Kennebunkport, Maine.

During altercations that followed the murder of Antifa activist Manuel Esteban Paez Teran, 26, who was slain on Wednesday, January 19, a police vehicle was set on fire and buildings were destroyed.

Carroll was originally charged with domestic terrorism in December for his participation in violent demonstrations at the site of the Atlanta Public Safety Training Center. Carroll grew raised in a home in a posh seaside resort.

The $90 million complex, which demonstrators have called “Cop City,” has been the focus of demonstrations since June 2021.

According to the Atlanta Police Department, Carroll, Nadja Geier, 24, of Nashville, Tennessee; Madeleine Feola, 22, of Spokane, Washington; Ivan Ferguson, 23, of Nevada; Graham Evatt, 20, of Decatur, Georgia; and Emily Murphy, 37, of Grosse Isle, Michigan, were all charged once again on Saturday.

All six are accused with domestic terrorism as well as offences including arson, causing criminal damage to property, and interfering with government operations. They are also accused of other misdemeanors.

The arrests show that Antifa leaders are enlisting activists from all around the nation to carry out acts of violence in Atlanta. The aggressive thugs, some of whom were raised in affluent homes, think that police departments need to be abolished.

In an effort to stop building, they have built camps near the training center site in the surrounding woods.

After reportedly shooting and wounding an officer during a mission to remove demonstrators from the area, Teran was fatally shot by police. After the tragedy, Antifa demonstrators demanded a “night of anger” against the police.

In downtown Atlanta on Saturday, police were engaged in a struggle with masked criminals wearing black uniforms as they vandalized cars and other property.

It doesn’t take a rocket scientist or an attorney to tell you that shattering windows or starting fires is not protesting; it is terrorism, according to Atlanta Police Chief Darin Schierbaum.

They will discover that the partnership and this police department are equally dedicated to putting an end to such behavior, and they will be prosecuted appropriately.

On Sunday night, new accusations against Carroll and the other five defendants were made public.

According to a police statement, activists vandalized property at a number of businesses along Peachtree Street, a stretch of restaurants and hotels. The statement also said that many people were arrested and that “calm was swiftly restored.”

Carroll, the son of physician Dr. Mike Carroll, was raised in a $2 million Kennebunkport estate with five bedrooms and four bathrooms. He spent time with his sisters on his parents’ boat before joining Antifa.

His mother is an avid sailor, while his father does general surgery at Maine Health County Medical Center.

Carroll-like guy may be seen aboard the vessel Allez in a 2016 photo, however the sailor’s name is unknown.

He was raised not far from the renowned Bush family estate, where George H. W. Bush spent his summers.

Carroll was apprehended in December when terrorists living in temporary treehouses close to the location of the police training center attacked officers with rocks and bottles. They are also charged of harassing the locals in the area.

Carroll, who deleted his social media accounts soon before being detained, was accused with trespassing, domestic terrorism, aggravated assault, felony obstruction, interfering with government property, and possessing instruments of crime.

How he was permitted to participate in more violent demonstrations over the weekend was not immediately apparent.