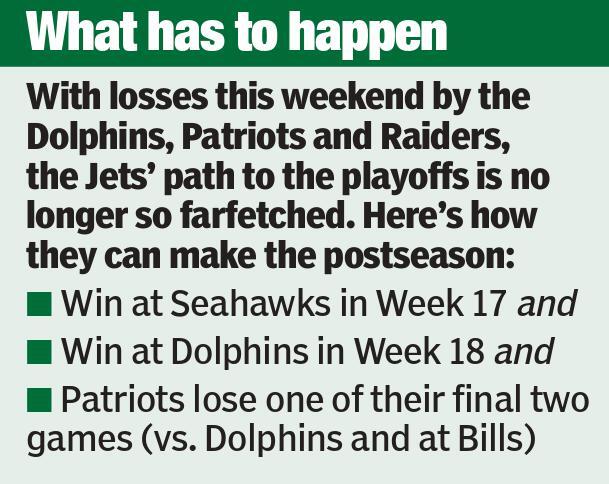 In the event that Mike White’s legendary status proved insufficient, he has returned in time to potentially save the Jets.

A little more than two weeks after breaking numerous ribs in a valiant effort against the Bills, White was cleared on Monday to play in Sunday’s game against the Seahawks, which the Jets must win to maintain their playoff aspirations.

Five days ago, the Jets’ season appeared all but gone after a fourth consecutive loss, with Zach Wilson playing the final two games in place of the injured White and not offering much optimism for his own future.

The Jets are suddenly back in business with White at the helm after a few key weekend results went in their favor. They owe thank-you cards to Rhamondre Stevenson, for his final-minute fumble that prevented the Patriots from taking the lead against the Bengals, and Tua Tagovailoa for throwing three interceptions in a loss to the Packers (following a potential head injury).

Before getting ahead of ourselves, a disclaimer: Even if the Jets defeat the Seahawks and Dolphins, they will still need assistance. It would be the Patriots losing a game to the Dolphins or the Bills. That seems sense, especially considering the Patriots’ offensive struggles this season, but when has Bill Belichick ever helped the Jets? In addition, there is a remote possibility that the Bills might rest players against the Patriots in Week 18, however a Chiefs victory over the Raiders this week would keep the race for the AFC’s top spot alive.

The other quarterback news released on Monday in the AFC East might further complicate the next two weeks. The return of Tagovailoa to the concussion protocol casts question on his availability for Sunday’s game against the Patriots. Whether he may return in time to face the Jets in Week 18 is uncertain, but it looms enormous. The Dolphins are 8-5 in games that Tagovailoa has started this season and 0-2 without him (one game started by Teddy Bridgewater and the other by Skylar Thompson).

In his last start on December 11, quarterback Mike White of the New York Jets was smashed by defensive tackle Ed Oliver of the Buffalo Bills, breaking many ribs.

However, they do have a chance, and they’ll take it with the quarterback who has made the Jets’ offense the greatest it’s been all year. That’s far more than they could say after Thursday night, which had a somber atmosphere.

There is much at stake for White as well. As unlikely as it may have looked at the beginning of the season, White may have one more opportunity to make his case to be the Jets’ starting quarterback next season in the next two games. Wilson seems increasingly unlikely to be the solution, but White may be. Or will the Jets have to seek Jimmy Garoppolo, Derek Carr, or another quarterback?

Zach Wilson was consoled by D.J. Reed following the Jets’ demoralizing loss to the Jaguars on December 22.

“One day at a time,” coach Robert Saleh said Monday when asked about White potentially being the long-term answer at quarterback.

These questions can be postponed for at least one week.

For now, the playoffs might as well be underway for the Jets. Their opponent this week, the Seahawks, need a win to help their own postseason push in the NFC. Then the season finale comes against the Dolphins, a game in which both teams could be fighting for a playoff bid.

Seahawks quarterback Geno Smith, Mike White’s counterpart on Sunday, is authoring a storybook season of his own.

If White is already a cult hero with a 2-4 career record, what will he be if he can come back quickly from broken ribs to lead the Jets to their first playoff appearance since the 2010 season? After beating the Bears in his first start this season, he put together solid games against the Vikings and Bills without the end result. It’s easy to believe things would have gone differently the past two weeks against the Lions and Jaguars if White had been under center instead of Wilson. Still, it’s not too late for White to play hero.

The wait continued Monday to determine whether the Mets and Carlos Correa’s camp could salvage a deal after his physical put a snag in their 12-year, $315 million agreement.

But regardless of whether Correa ultimately becomes a Met, questions will linger about Steve Cohen and whether he is good for the game of baseball after his free-agent spending spree.

Soon after the news broke of Correa’s agreement with the Mets — which would raise the club’s offseason total to $807.16 million handed out to 10 free agents with its 2023 payroll surging to about $384 million for luxury-tax purposes — the critics came following.

“The system is broken,” a rival NL executive told The Post’s Jon Heyman, speaking about a system that was shaped with a new collective bargaining agreement signed this past March.

“I think it’s going to have consequences for him [Cohen] down the road,” an official with a major league team told The Athletic.

It probably shouldn’t be surprising opposing executives see Cohen’s spending as a problem with the game. But in reality, it’s only a problem for his fellow owners because it exposes their unwillingness to spend as much as they need to put a legitimate title-contending team on the field.

Sure, the low-payroll Rays and Guardians have been good stories for their ability to contend with the big spenders and build their farm systems to produce young, cheap talent on a yearly basis.

The Guardians and Rays reached the postseason with meager payrolls, covering for owners who don’t spend to build title contenders.
MLB Photos via Getty Images

But there is more than one way to build a winning team. The Rays’ and Guardians’ strategy takes time. Cohen, a Mets fan who happens to be worth $17 billion, stated when he bought the team that he wanted to win a World Series in three to five years. Next season will be Year 3.

Maybe Cohen’s hefty expenditures will pay off with a title next October/November. Perhaps it will all come burning down by August because of injuries. There’s fun in finding out.

But criticizing Cohen for spending big in the name of winning — when it shouldn’t necessarily come as that big of a surprise — just reeks of owners who know questions soon will come their way as to why they are not doing the same.

Bill Belichick has certainly earned the benefit of the doubt in New England. Winning six Super Bowls since 2001 will do that.

But we may soon find out how long that grace period lasts and whether it actually has an expiration date.

Belichick’s decision to install the defensive-minded Matt Patricia as his pseudo-offensive coordinator this season has somehow gone even worse than expected. Second-year quarterback Mac Jones has regressed with Patricia calling plays and often lets his frustration out on the sideline. Their offensive line — a unit that is coached by Patricia and features Belichick’s latest questionable first-round pick, Cole Strange — has not given Jones much help.

The offensive ineptitude has put the Patriots’ playoff chances in serious jeopardy, despite having one of the top defenses in the league. Their past two losses, to the Raiders (an unnecessary lateral gone wrong at the end of regulation) and Bengals (Stevenson’s fumble), have been especially brutal.

Bill Belichick refuses to concede his decision to put Matt Patricia (left) in charge of the Patriots offense has been a disaster.

In many cases, Patricia might have already been stripped of play-calling duties in the middle of the season, if not fired. Common sense would say he has to be reassigned elsewhere on the staff this offseason. But if Belichick’s stubbornness tries to make it work again next season, then what happens?

“I think they’re both good coaches,” Belichick told The Boston Globe before the season of Patricia and former Giants head coach Joe Judge, now the Patriots’ offensive assistant/quarterbacks coach. “Ultimately, it’s my responsibility, like it always is. So if it doesn’t go well, blame me.”

The fan base already has. But what will it look like if owner Robert Kraft does, too?