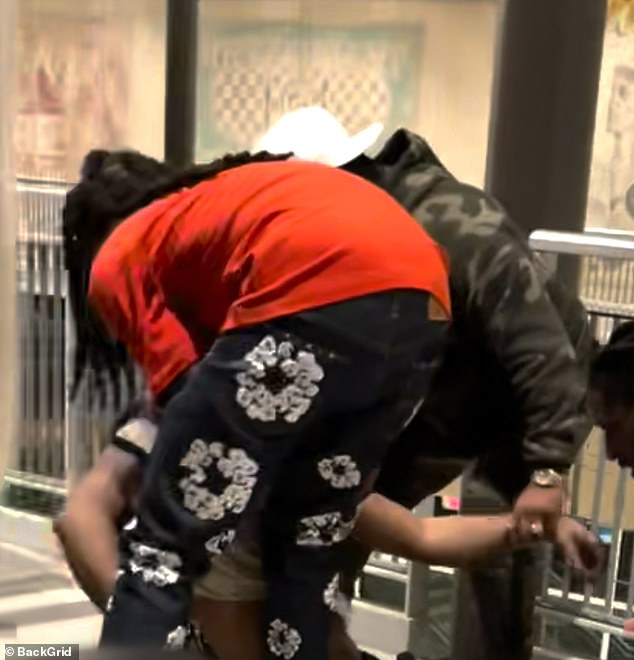 Outside a Texas bowling alley, Migos rapper Takeoff was shot and killed “over a game of dice” in front of his uncle and bandmate Quavo.

The hip hop group member, 28, was shot at a 2.30am “private party” as a crowd gathered outside of the 810 Billiards & Bowling Houston.

The Houston Police Department stated that one individual was discovered dead at the location at 1200 Polk, but they did not release the victim’s name.

When they found a guy with a gunshot wound to the head or neck, they determined that there were 40 to 50 individuals there.

According to authorities, security personnel in the neighborhood heard the gunfire but did not see the perpetrator.

According to TMZ, five rounds were fired, and witnesses told police they heard additional shots fired as well as shouting.

According to images from the scene, the rapper was “shot in the head” during the argument and is now laying dead in a pool of blood.

The assassination has drawn criticism from friends and followers for its “senseless brutality,” and tributes to the musician are flooding in.

He shared an Instagram story of himself wearing the same clothes hours before the incident.

Unknown situations exist for the two other patients who were also transported in a private car to the hospital.

Before the incident, Takeoff, actual name Kirshnik Khari Ball, played dice with his uncle Quavo, according to witnesses and law enforcement officials who spoke to TMZ.

Takeoff is seen laying on the ground as Quavo rushes to his side in the horrifying video from the incident.

As a crowd gathered around the wounded rapper, they attempted to move him, but as Quavo cried for assistance, they rapidly dropped him to the ground.

In the incident’s video, multiple ladies can be heard yelling to “go inside,” while a male can be heard stating, “I’m frightened for you buddy.”

Takeoff, his cousin Offset, who is married to Cardi B, and his uncle Quavo established the group Migos in 2008.

Offset was spending Halloween with Cardi B and their kids, not in Houston with his father and cousin.

Takeoff shared a photo of himself smoking at the bowling alley four hours before to the incident.

Additionally, Quavo shared an Instagram story of himself touring Houston while Jas Prince was honoring his birthday.

There may have been a celebration for Prince at the ‘secret party,’ according to witnesses, who estimate that present were at least 40 to 50 individuals there.

Takeoff was fatally shot early on Tuesday morning, according to a Migos official.

Rappers include US artist Russ Diemon and British rapper AJ Tracey have paid tribute to Takeoff.

In response to Jake Paul’s demand for an end to “senseless deaths,” Jemele Hill noted that you “barely have time to heal” before someone else is slain.

Keri Hilson, a singer and actress, posted: “Rest In Peace, @1YoungTakeoff. Love and healing to your brothers, loved ones, and friends. #gonetoosoon’.

With their album “Only Built for Infinity Links,” Takeoff and Quavo made their debut as a duet earlier this month.

Although there have been rumors that the Atlanta rap group Migos are breaking up permanently, there hasn’t been a formal statement.

Instead, Takeoff and Quavo independently released their song “Only Built for Infinity Links” without Offset.

Recent releases by Quavo and Takeoff include the album ‘Unc & Phew’ and the music video for ‘Messy,’ which was made available on Monday, only hours before the murder.

Despite the fact that each of the three performers has previously produced albums as a solo artist, some fans are persuaded that there is discord among the hitmakers.

2018’s Migos album Culture II by the trio debuted at the top of the US Billboard 200 albums list.

Their first US number-one album, Culture, which produced the megahit “Bad And Boujee,” was followed by this one.

Given that Takeoff is Quavo’s nephew and that Quavo and Offset are cousins, there is a strong familial tie among the Migos.

Versace, Migos’ first single, was released in 2013. Drake remixed the song and added a verse of his own, giving it a fresh lease of life even though it peaked at number 99 on the Billboard Hot 100 songs list. He even went so far as to play it at the iHeartRadio Music Festival that year.

Versace was a featured artist on the Y.R.N mixtape by Migos, which was released in June of that year. The trio followed up their No Label mixtape the following year with No Label II.

The mixtape was a great success, with about a million downloads, and has been awarded double platinum status by DatPiff.

In June 2015, the group—which has received two Grammy nominations—released Yung Rich Nation, which reached at Number 3 on the Billboard Top Rap Albums list.

The music industry expresses horror over the shooting death of rapper Takeoff by saying, “I’m in shock right now.”

After the Migos rapper Takeoff was shot dead on Tuesday “over a game of dice” in front of his uncle and bandmate Quavo outside of a bowling alley in Texas, tributes to him have poured in.

As word of the shooting spread, Takeoff’s friends and fans paid homage to him on Twitter by using his true name, Kirshnik Khari Ball.

Not Takeoff! RIP was the tribute written by British rapper AJ Tracey.

“I recall @1YoungTakeoff being a really down to earth, pleasant man,” remarked boxer Chris Eubank Jr. Can’t believe I have to say this again about another young black celebrity being murdered without cause. The entertainment business has to alter drastically because it is horrible how often and easily people are dying. Takeoff, RIP.

Do y’all not aware these n***** affected the whole rhythm of rap when they came out, said rapper Ugly God? Takeoff, rip. Since the beginning, this guy has kept to himself, kept things to a minimum, and paid attention to his own business. If that’s not reason enough to be ignored, dunno.

Claudia Johnson, a reality personality, tweeted: “Sad & senseless. He was shot while only watching. We must act in response to everyone and their mother in Texas possessing firearms! Particularly irresponsible individuals who can’t just disagree with someone must turn to this! My sincere sympathies go out to Takeoff’s whole family. Dead at 28.”

Adin Ross, a broadcaster on Twitch and YouTube, wrote: “Rest in peace to takeoff.” I recently chatted with him as well. Right now, I’m in a state of disbelief. I beg God to make it phony. It’s simply not fair, man, what the hell.

While YouTuber Nikita Dragun shared a photo of Takeoff, fellow rapper Russ wrote: “rip Takeoff” and an emoji for prayer.

On Takeoff’s Instagram, US rapper Almighty Jay wrote: “Buddy you was so laid back gang you didn’t deserve none of that bro.” I just spoke with you, brother. It ached like s***.

“When I was a youngster, Tupac and Biggie being shot was a huge thing,” said radio personality Darvio Morrow. Major performers like that weren’t shot and murdered, as you probably recall. Now, it seems to occur once every two months. I’ve never seen this many well-known artists slain. And over a game of chance? Senseless. Let Takeoff go.

I want to see more Black males with grey hair, the author Frederick Joseph wrote. advancing in age and wisdom. I’m devastated that we must constantly post “Rest In Peace” since another one of us has been killed by violence. But here we are, good night, and take off.