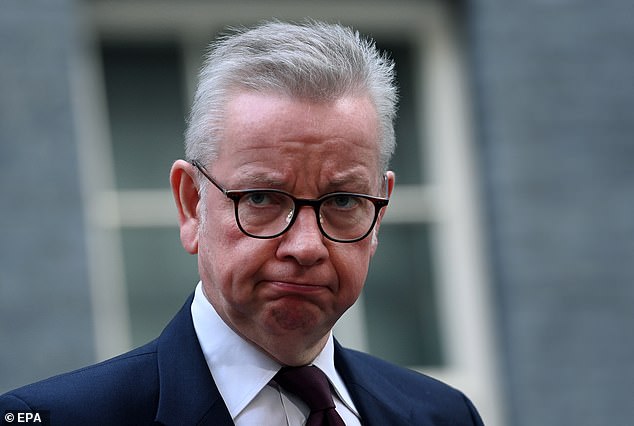 Yesterday, the returning Levelling Up secretary criticized Liz Truss’s dismal 44 days as prime minister and vowed to regain the country’s trust by reversing her economic policies to heal the economy.

Michael Gove apologized to the nation as he criticized the former leader, who he disliked.

Gove’s criticism of Truss’s plan to slash 45p of income tax for high earners at the Tory conference earlier this month was one of the elements that finally led to her resignation as prime minister.

The supporter of Rishi used a column in the Sun to discuss the continuing economic chaos caused by Truss’ decision to pass a short budget.

Gove referred to Truss’s first 44 days in power, during which she lowered taxes for the wealthy, as a “vacation from reality” and stated that the Conservatives had selected the wrong leader in the summer.

He stated that he intends to construct more affordable houses, which will assist families in climbing the property ladder.

In addition, he has pledged a housing revolution, an end to the cladding crisis, and enhanced protection for renters.

In addition, he is introducing new legislation to prohibit landlords from arbitrarily evicting renters.

It is anticipated that he will reverse many of Truss’s ideas, notably her plan for nationwide ultra-low tax investment zones.

Gove has not denied that the United Kingdom confronts “deep economic issues” and that he will be “direct” about them upon his return.

The Secretary for Leveling Up emphasized that difficult decisions are necessary due to the economic freefall caused by the small budget, which also wrecked havoc on the markets.

He said that it has also created a financial black hole that his boss, the newly appointed prime minister Sunak, is attempting to plug.

Gove lauded Sunak, stating that he possesses the experience, skill, and compassion to guide the nation through its economic difficulties.

He cited Sunak’s furlough program as an example of his economic accomplishment during his tenure as chancellor, which prevented widespread unemployment.

Currently, Sunak is attempting to find £50 billion for budget cutbacks and revenue increases.

Gove’s promises to the British people come after he disparaged Truss earlier this month by praising’strong leadership’ on Twitter following her poor press conference.

As the Prime Minister spoke in Downing Street, he uploaded a photograph from a visit to a school in his Surrey seat.

Ms. Truss held a pivotal press conference less than a month into her premiership to abandon plans to keep company tax at 19p instead of increasing it to 25p in April.

Earlier, she compelled her chancellor, Kwasi Kwarteng, to resign and replaced him with Jeremy Hunt.

She stated that she had made a “tough” decision for “economic security” and “in the national interest,” but that her “goal” to decrease taxes remained unchanged.

She stated, “We will get through this storm.” “The mission remains unchanged, but we must ultimately provide economic stability.”

Ms. Truss refused to apologize for ‘tarnishing’ the reputation of the Conservatives as she suddenly left the press conference after eight minutes and four questions.

Shortly thereafter, Mr. Gove tweeted a photo with the following caption: “Good to speak with Surrey Heath headteachers today – giving great leadership for the next generation.

It comes after the former minister, who was fired by Boris Johnson earlier this year, made a number of economic policy-related remarks during the Conservative Party Conference last week.

He opposed Ms. Truss’s reluctance to increase benefits in line with inflation rather than salaries and opposed plans to eliminate the 45p tax rate, which were ultimately abandoned.

Ms. Truss stepped up to the podium inside No. 9 Downing Street to give a statement announcing the corporation tax reassessment.

When asked why she should remain as prime minister, she responded, ‘I’m completely committed to delivering a United Kingdom with higher growth and greater prosperity to help us weather the storm we face.

‘We’ve already delivered the energy price guarantee, ensuring that no one will face astronomical energy costs this winter.

In spite of our problems, I took decisive action to ensure economic stability since it is extremely important to citizens and businesses across the nation.

When asked if she would apologize to her party, Ms. Truss told reporters, “I am committed to carry out the promises I made during my campaign to become party leader.”

“We must have a high-growth economy, but we must also recognize that we have very grave challenges as a nation.

“And it was right, in the national interest, for me to make the decisions I’ve made today to restore economic stability so that we can deliver, first by helping people through this winter and next winter with their energy bills, but also by putting our nation on a long-term path to sustainable economic growth,” he said.

Mr. Kwarteng was given his marching orders upon his return to Downing Street following a conference with the United States, as the prime minister faced a possibly fatal Tory rebellion.

Former foreign secretary and two-time unsuccessful leadership candidate Mr. Hunt made a surprise comeback to No. 11 as a “safe set of hands.”