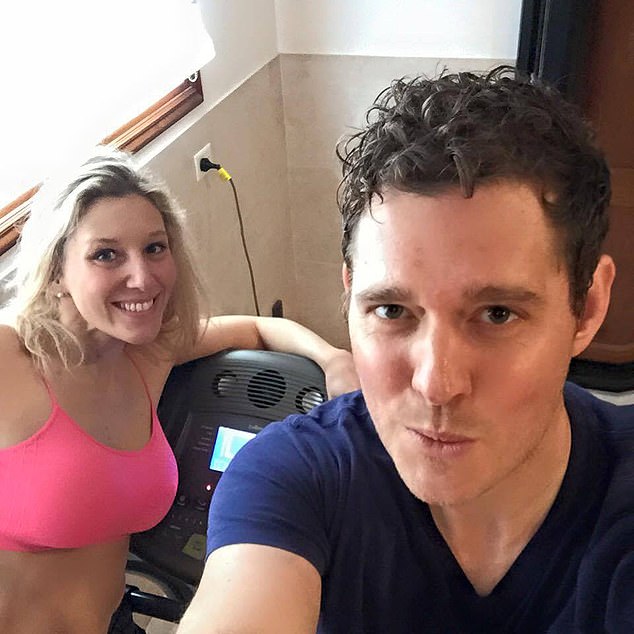 The nutritionist Daniela Lopilato was brought to the hospital when the car she was driving overturned and landed on its roof after being rear-ended by another vehicle.

After sustaining neck and spinal injuries in the accident in the Buenos Aires suburb of Martinez, the mother of two had to be extricated by firefighters.
Photographs taken at the scene of the accident depicted the 43-year-overturned old’s car with its wheels pointing to the sky next to a lamppost in front of a house on a residential street.

Daniela told Argentinean journalists that she believes God granted her a second chance.

Daniela, whose younger actress sister Luisana is just days from from giving birth to her fourth child with Canadian-born Buble, has not yet spoken publicly about her fright around Wednesday midday local time.

However, Argentinian journalist Pia Shaw, commenting on a television program that broadcast footage from the crash scene overnight, stated: ‘The sights you are currently viewing are horrific, and Daniela Lopilato is the main character.

She was admitted to the Los Arcos Hospital in Buenos Aires, but is now back home.

“The vehicle on the roof is Daniela’s.

This occurred in the Martinez region. Another driver rear-ended Daniela’s vehicle. It was a significant collision.

She had neck and back injuries, was unable to exit the vehicle, and was terrified. Firefighters were dispatched to her aid.’ She continued, “The other motorist stopped and gave us their information.” The last time I spoke with Daniela, she had just been released from the hospital, and she told me she was just beginning to realize that God had given her a second chance.

“She feels alive because of God. She is alright, but she has been through a horrible incident and is still rattled by it.

Noah, nine, Elias, six, and Vida, four, are Buble and Luisana’s children; the pair is expecting their fourth child.

In February, it was revealed that Luisana was pregnant when she appeared in the music video for I’ll Never Not Love You, bringing her husband out of a dream scene with her expanding baby bulge on display.

Noah was diagnosed with hepatoblastoma, a form of liver cancer, at the age of three in 2016. In April, Buble stated he was feeling “very unstable and vulnerable”

The child endured chemotherapy and radiotherapy, and Michael temporarily put his job on hold to care for his son.

The jazz singer, though, stated that he was eager to get back into the swing of things now that his son’s cancer has gone into remission.

Even after his son’s early remission, Michael continued to experience worry and confusion over his son’s diagnosis.

He told The Mirror, “Obviously, I’ve been through a lot.” When I recorded my last album [in 2018], my son had just entered remission, and I was not prepared to return,’ he explained.

“I didn’t realize it at the time, but I was so mentally unstable and susceptible. I crafted a safe album with producers I loved in an effort to protect myself and preserve my career.

But now I feel fantastic, and I was raring to go, as if a massive weight had been lifted off my shoulders. My son was healthy, my children and wife were doing well, and life was good. Why wouldn’t I erupt with the desire to create an outstanding album?’