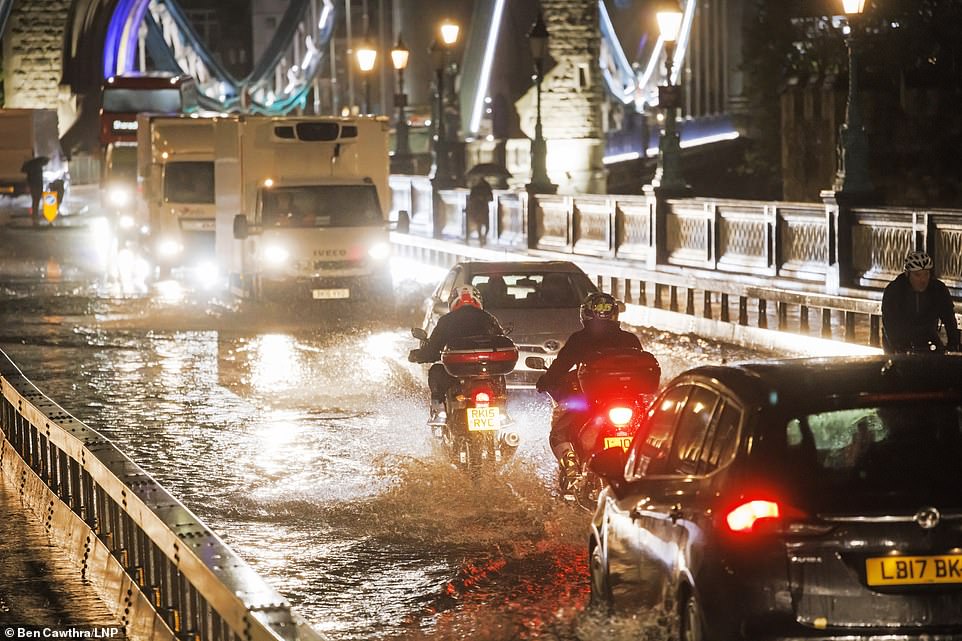 Forecasters projected that downpours might dump more than three inches of rain in less than 24 hours, causing congestion on the roadways. Motorists have been cautioned to remain off the roads today.

As a month’s worth of precipitation falls in three days, the Met Office has warned that some areas of the country might receive nearly four inches of rain.

The service has issued two heavy rain warnings for broad portions of the midlands, the north, and eastern Scotland, while the Environment Agency has issued 24 flood warnings and 98 flood alerts across England.

There is also significant disruption on the trains in and around London this morning, with trains from Essex into the capital being delayed after a lorry reportedly struck a railway crossing barrier, and a broken down train in Kent causing lengthy delays for commuters attempting to go to work.

This morning, a portion of the Piccadilly Line between Rayners Lane and Uxbridge is suspended due to “severe leaf fall,” while the southbound lanes of the M23 are restricted between junctions 10 and 11 as crews attempt to clear standing water.

Last night, torrential rain delayed dozens of motorists after a portion of the A27 in West Sussex transformed into a river due to flooding, a scenario that could be replicated elsewhere in Britain today.

The night was spent by emergency personnel attempting to liberate those caught in the horrifying conditions and retrieving vehicles from the rising water. The road’s eastbound carriageway remained closed as of this morning.

Forecasters have forecast that Britain would experience “miserable conditions” for the next two days due to a weather front that will bring strong winds and bands of persistent rain to the country.

This morning, motorists battle through heavy surface water on Tower Bridge as a result of the days’ worth of severe downpour.

Forecasters predict that in only 24 hours, more than three inches of rain could fall, turning roadways across the country into rivers.

The’miserable circumstances’ are expected to continue for the next couple of days, with some areas of the country receiving up to four inches of precipitation.

Automobiles were observed driving over significant floodwater as a half-inch of rain poured across the United Kingdom.

Between Fishbourne and Havant on the A27 in West Sussex, over 20 vehicles were stalled in both directions as firefighters tried to release their occupants.

Approximately 20 vehicles are stalled on the A27 in west Sussex following last night’s severe downpour.

The forecaster issued a yellow warning for rain, stating that conditions may be “horrendous” in parts of the United Kingdom, while the Scottish highlands may experience snow.

In England, the Environment Agency issued 24 flood warnings and 98 flood alerts. Warnings are issued in Dorset, Hampshire, East and West Sussex, Kent, and Surrey, which are primarily located along the southern coast. Additionally, there is one caution in North Yorkshire.

In the areas covered by the warnings, residents have been advised to anticipate flooding on certain highways and low-lying areas and to avoid attempting to navigate through the floodwater.

The Met has issued a yellow weather warning for the entirety of today for vast portions of England, indicating that more than three inches of rain will fall in certain regions, while a second warning is in effect for Scotland for portions of today and tomorrow.

This region includes Birmingham, Lincoln, and Hull, as well as north Wales, Liverpool, and Manchester, as well as the east coast up to the Scottish border.

On its website, the Met Office explains the warning, stating: ‘Rain, at times heavy, will spread northwards through the Midlands, north Wales, and northern England during the night of Wednesday, continuing for the majority of Thursday.

Over a 24-hour period, widespread precipitation of 30 to 40 millimeters is likely, with a small probability of 60 millimeters in a few locations and potentially as much as 80 millimeters on higher ground.

This increases the likelihood of flooding and interruption. Thursday night, the rain is forecast to become less widespread and more intermittent.

The second warning will be in effect from today at 3 p.m. until Friday at 6 p.m. for the east coast of Scotland, extending from the English border to Aberdeen, with similar flood and transportation disruption threats.

Craig Snell, a spokeswoman for the Met Office, stated yesterday, “The warning zones are where we are most concerned about the potential of floods, but it does not mean that the places outside of them will not experience some pretty terrible circumstances.”

Mr. Snell stated that a warning had been issued for the southeast of England because ‘it has been quite rainy there since the start of November, with several locations already receiving more than their monthly allotment of precipitation’

Mr. Snell said that the midlands and northern regions of England will see a “very dismal day” on Thursday due to the overnight rain.

The rain will be accompanied by a strong breeze, so the weather will not be pleasant.

However, he noted that Scotland might have “two days of steady rain,” which could result in snowfall in the highlands, though this is not uncommon for November.

Tomorrow, if you take a walk in the hills of Scotland, you may encounter snow, but at lower elevations it will be rain, he said.

After floodwaters breached a riverbank in West Sussex, metal fences were twisted out of shape.

West Sussex Fire & Rescue tweeted: “A27 CLOSED in both directions between Fishbourne, Chichester, and Havant.” Approximately 20 automobiles are submerged in floodwaters.

This street in West Sussex was flooded, which caused a sewer to overflow.

A vehicle became submerged in floodwater after a riverbank in West Sussex burst owing to heavy rains.

‘The likelihood of being involved in a collision increases dramatically in wet weather, and even more so in snowy conditions, so it’s vital that drivers slow down, leave plenty of space behind the vehicle in front of them, and use their lights to make themselves easily visible to other drivers,’ he said.

Aquaplaning, which occurs when a vehicle’s wheels lose contact with the road as they skim across standing water, will be a significant hazard, especially for drivers who do not reduce their speed appropriately for the conditions.

Yesterday evening, the A27 between Emsworth and Chichester was stopped in both directions as the West Sussex Fire and Rescue Service attempted to extricate flooded vehicles.

The service tweeted: “A27 CLOSED in both directions from Fishbourne, Chichester to Havant.” Approximately 20 automobiles are submerged in floodwater.

We are tremendously occupied with several flood-related occurrences, such as rescuing people from vehicles and dealing with flooding in buildings.

And the travel service Romanse advised motorists of ‘severe delays’ on the A27 and A3M near Havant, Hampshire, due to floods caused by the rain.

Additionally, police in Winchester, Hampshire, have reported that a large tree has fallen and blocked a road in Swanmore.

»Met Office predicts 3 inches of rain in 24 hours, with 24 flood warnings in effect«