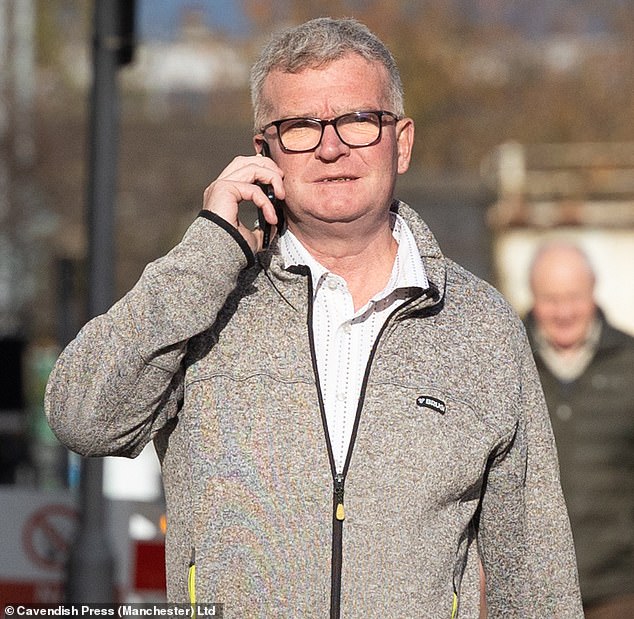 A former head of children’s services has admitted to sending threatening messages to his ex-girlfriend after she ended their brief long-distance relationship.

According to reports, he desired a “more serious connection” with Miss De Roberto, 32, but she was uninterested in prolonging their relationship.

McClure, 52, also notified his ex-partner through email that he would visit her home in Surrey, which was approximately 220 miles away from his residence.

Miss De Roberto, a therapist who specializes in cognitive-behavioral therapy, was reportedly terrified by his communications.

Last Thursday, in Warrington Magistrates Court, McClure pled guilty to non-violent harassment. He was released on bond pending a probation report, and he will be punished next month.

Ian McClure, 52 (pictured), has guilty to sending threatening messages to his ex-girlfriend after she ended their brief long distance relationship.

While drunk, McClure, an advocate for mental health awareness, sent unwelcome comments to Jasmine De Roberto (pictured) via the riding program Strava. According to reports, he desired a “more serious connection” with Miss De Roberto, 32, but she was not interested.

The couple had a “very brief connection” before McClure began pestering Miss De Roberto, who resided in Tongham, Surrey, and their affair ended.

Miss Yvonne Dobson, the prosecutor, told the court, “They have only met a handful of times since December 2021.”

Miss De Roberto reported to police on June 14, 2022 that she was receiving “unwanted contact” from McClure, despite the fact that she and McClure had stopped their relationship 10 days earlier.

Miss Dobson explained: “This was when the defendant wanted a more serious connection, which she did not want.”

The court heard that Miss De Roberto sent McClure a message on June 10 requesting that he cease all contact with her.

McClure responded that he would not communicate with her again. However, between June 10 and 14, the victim did get a number of voicemails from him.

McClure, of Great Sankey, Warrington, met Miss De Roberto (pictured) last year while serving as the “champion” of community mental health for the local organisation Warrington Speak Up. The couple then had a “very brief connection” prior to the conclusion of their affair.

Miss Dobson asserted that McClure’sounded inebriated’ in the ‘vast majority’ of his texts and that he stated he would ‘coming to Surrey.’

Miss Dobson stated of Miss De Roberto, “She was fearful of this.” “The defendant was aware of the victim’s address.” On June 12, he wrote a comment about her running route on Strava. The victim removed the app and blocked the profile.

Between June 13 and June 19, the victim also got a handful of unsolicited emails from McClure.

Miss Dobson, informing the court that McClure had no prior convictions, requested a restraining order that would prohibit the defendant from entering Surrey.

In mitigation, defense attorney Richard Thomas explained that his client’s mental health difficulties may have been the reason he contacted the victim.

“This was an intermittent relationship,” Mr. Thomas explained. “They only met a handful of times, and the course of conduct spanned three weeks, during which Mr. McClure made contact by phone and through a few messages.” He also posted on Strava.

Mr. Thomas acknowledged that McClure had “very limited interaction” with Ms. De Roberto and that he “pled guilty at the earliest chance.”

Miss De Roberto reported to authorities on June 14, 2022 that she was experiencing “unwanted contact” with McClure (above), 10 days after ending their relationship.

Miss De Roberto was afraid of this, the prosecution argued (pictured). “The defendant was aware of the victim’s address.” On June 12, he wrote a comment about her running route on Strava. The victim removed the app and blocked the profile.

The defense also stated that the incident occurred in June and that there has been no further contact since then.

Additionally, he resides in the Northwest, while she resides in Surrey. They are geographically separated by a vast distance,’ Mr. Thomas added.

The defense also questioned McClure’s mental fitness, stating, ‘From what he has told me, and as confirmed by the complainant’s statement, he has serious mental health issues.

Indeed, this is ironic. His job has been to counsel suicidal individuals, and the situation in 2022 has deteriorated drastically. He battles with both life and suicide tendencies.

Mr. Thomas argued that McClure should receive assistance from mental health services rather than the probation department.

Never before has he been in trouble with the police. He has never appeared in court,’ the defense stated.

“Deep-rooted, perhaps understandable, issues in his life have led to his recent behavior,” the author writes.

Next month, McClure will be sentenced. He was granted bail on the condition that he not approach or communicate with Miss De Roberto. Additionally, he is prohibited from entering Tongham, Surrey.

Next month, McClure will be sentenced.

He was granted bail on the condition that he not approach or communicate with Miss De Roberto.

Additionally, he is prohibited from entering Tongham, Surrey.

Chairman Andrew Brothers told him, “We are concerned about your mental health, and we believe it would be in your best interest and the victim’s best interest to have the probation services speak with you about a report.”

We do not wish to overlook anything. It is possible that you will still be fined the next time, but we believe it is in your best interest to complete the report.

McClure is currently the manager of customer service for a fundraising organization.

At the time of the incident, he was working as a suicide prevention counselor in Warrington, Cheshire. Previously, he had served as the director of a secure children’s home.