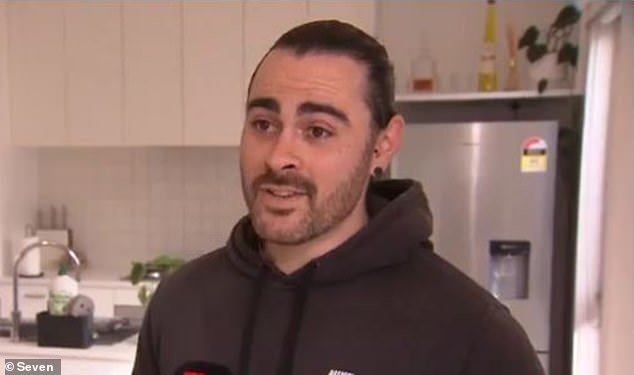 Dozens of households have been unable to drink, cook, or shower for many days due to concerns that chemicals have polluted their water supply.

Residents on Langs Road in Melbourne’s inner-city district of Ascot Vale were given a ‘do not use’ warning due to concerns about ‘discolored’ water within a ruptured pipe. Great Western Water turned off the service after a vehicle pumping water out of the pipe may have mistakenly pushed some back in.

Following discussions with the Department of Health, we advise customers not to consume tap water in the following areas: Langs Road, Epsom Road, Chauvel Street, Ascot Vale,’ the provider said on Tuesday.

‘As a precaution, we have turned off the water supply to the affected area.’

Joshua Marmara, a Langs Road homeowner, told 7News that he would have welcomed some warning before being left high and dry for the foreseeable future.

‘It’d be very wonderful if they notified us right away, you know, just an email, maybe a phone call, doesn’t matter if it’s early in the morning, just anything to communicate,’ he added.

The halt has impacted the Ascot Vale Leisure Centre and Ascot Vale West Primary School, with bottled water given to children and locals. Those impacted have been offered free lodging at a hotel 10 minutes away while field personnel conduct checks on the water supply.

‘Chemical residues from inside a water truck may have influenced our water network, allowing possibly dangerous water to reach the drinking water system and consumers’ taps,’ according to a statement on its website.

‘If customers are unable to get water from us, they should buy bottled water from their local store.’ If you are feeling sick, please call your doctor and inform him or her of this caution.’

Greater Western Water stated on Thursday that water was still turned off for impacted houses and that the problem will be repaired by noon the same day.

‘Today, we’re flushing water mains to clean the pipes and testing the water to verify it’s safe to use before we can put the water back on,’ the provider tweeted just after 11 a.m.

‘Water has been shut off to these customers while we safely execute this repair, and we anticipate to have your taps flowing by midday today.’