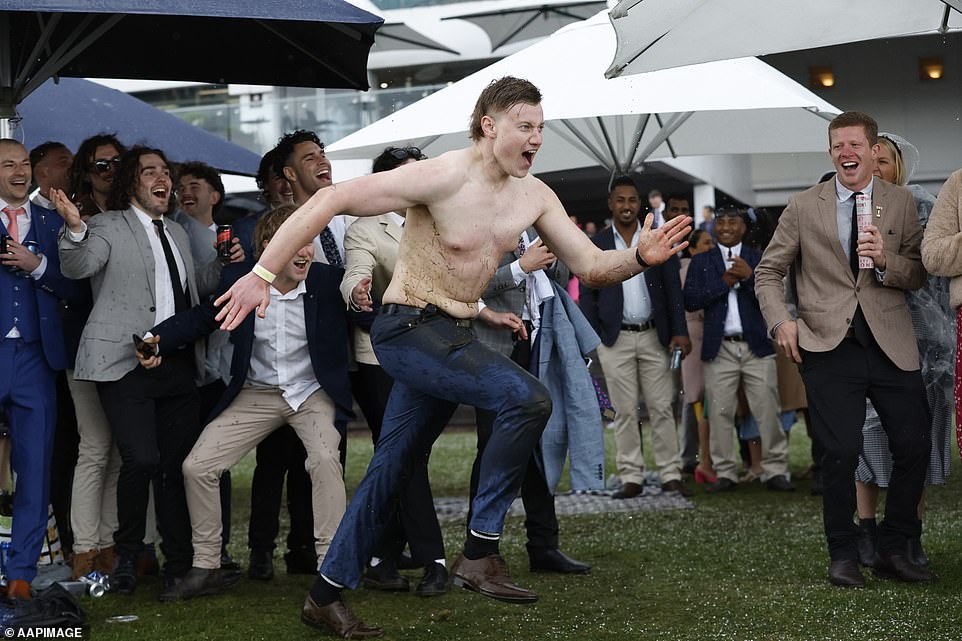 This year’s Melbourne Cup did not disappoint, with glitzy guests celebrating till the wee hours of Wednesday morning in honor of the race that stops a nation.

The largest event in Australia’s racing calendar attracted a vibrant throng who enjoyed a drink and a wager trackside before continuing the party at post-race celebrations in Sydney, Melbourne, and around the nation.

Here is a recap of some of the most memorable moments from the 2022 Melbourne Cup, including some of the best (and worse) images you won’t forget till the next major horse race.

As the festivities at Flemington and Randwick began to wind down, punters in Melbourne and Sydney made sure to keep the party going, with one audacious participant removing his shirt totally.

During a hailstorm, a swarm of perplexed partygoers gathered around the young man as he discarded his dress shirt and decided to utilize the wet grass as a personal slip-and-slide.

Photos depict the man racing quickly before crashing to the ground and sliding to the enjoyment of his friends, who cheered the prankster on while others captured the incident on their mobile devices.

One woman was photographed making her pals giggle as they attempted to leave the Sydney race celebrations by clinging to a male companion and nearly sending him over a nearby hedge.

As the party finally made its way to post-race festivities, the well-dressed participant nearly experienced a wardrobe malfunction as she stabilized herself and landed a kiss on another man.

As the clock hit midnight on Tuesday, revelry was far from finished as women sipped beers on the street and couples stole passionate kisses beneath the stars.

However, not everyone’s evening went as planned, as one shoeless woman was left face-down on the sidewalk before another Melbourne Cup guest helped her to her feet.

Melbourne revelers had the coldest Melbourne Cup Day since 1995, with many compelled to damage their pricey attire with a jacket, poncho, or umbrella.

A woman in a bright pink raincoat took a well-deserved seat on her friend’s knee, while a man appeared to have soiled the rear of his beige jacket by sliding or rolling on the damp grass.

Those who stayed until the end of race day in Melbourne were greeted with a breathtaking rainbow that spanned the entire track, which punters saw as a message to dance on the grass.

Women kicked off their heels as guys formed a conga line and demonstrated coordinated footwork.

Others, however, took advantage of the opportunity to battle on the grass, as unimpressed spectators watched from within the Birdcage.

Huge mountains of trash, including numerous cans and bottles, were left alongside the racetrack for officials to clear up, while guests continued their festivities elsewhere.

Attendees of Australia’s largest horse racing event who were still standing in the early hours were observed smoking vapes and messaging on their phones as they returned home.

Gold Trip, ridden by rider Mark Zahra, stormed to victory as Emissary and High Emocean placed second and third-from-last, respectively, in an outstanding effort on the track.

In the final 300 meters of the dramatic race, the jockey was seen giving the champion horse his all, passing the favorite Deauville Legend and ending with an X-rated spray at his opponent jockeys.

Zahra admitted that he wanted the other jockeys to ‘p*** off’ and that he was ‘going to cry’ after winning on Gold Trip.

The jockey stated in a post-race interview, “He’s a horse that when you go for it, you want to go for it.”

It is completely and utterly unreal. I seriously doubted he could run 3200 meters.

During the tense closing moments of the stretch, he prayed that his other jockeys would simply “p*** off.”

“During the final fifty meters, I was convinced I’d win.” The final portion lasted forever. I am still unable to believe it. Melbourne Cup, it’s unbelievable.’

It was redemption for Zahra, who was forced to watch his mount Verry Elleegant win the 2021 Melbourne Cup while he sat out due to violations of Covid regulations.

Last year at this time, I was watching Verry Elleegant win and being reprimanded for excessive drinking. To return a whole year later and obtain redemption on a horse like this with my close friends. it’s just an awesome sensation,’ he remarked.

Interpretation was the lone horse that did not complete the race, however it is believed that the horse is well.

Earlier in the day, officials were on high alert after vandals dumped a ‘oily’ material over the Flemington racetrack, potentially injuring the horses and jockeys.

Unknown perpetrators broke into a Flemington racing facility around 6 a.m. and poured an unknown chemical over a stretch of the track, according to Victoria Police.

To protest the Melbourne Cup, the self-identified problem gambler released a statement stating they pumped 1,000 liters of an oily liquid onto Flemington Racecourse.

The Victoria Racing Club stated that cleaning had been performed at the 1500-meter mark, but the track was safe and the race will go.