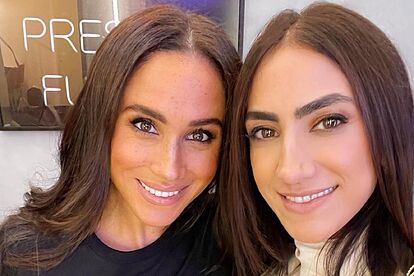 The head of audio for Prince Harry and Meghan Markle’s Archewell Foundation has departed, Page Six has learned, and it is unknown if Markle will host a second season of her podcast.

Rebecca Sananès, who oversaw Markle’s controversial Spotify podcast “Archetypes with Meghan,” is leaving the firm after less than a year to begin her own venture, according to sources.

She is the second prominent Archewell employee to go in recent days.

Sananès was recruited for the podcast and was essential in its establishment, coming up with the name and booking guests including Mariah Carey, Andy Cohen, Amanda Gorman, Serena Williams, and Paris Hilton.

It has not yet been determined whether “Archetypes” will return for a second season.

After working for Vox Media and New York Magazine’s “Pivot” podcast, hosted by Kara Swisher and Scott Gallagher, Sananès was recruited in July 2021. She joined Archewell in August 2021 and reported to Archewell’s content director, Ben Browning.

In October, Sananès stated on Instagram, “The podcast business drastically undervalues and undercredits the EXTREMELY skilled and diligent producers and sound engineers behind your favorite episodes. There are fewer and fewer chances for creators, which is financially and creatively strangling the business.”

She immediately amended the post to include the following clarification: “TO BE CLEAR, this is not about me or my present employment. It is a general assessment on the state of podcasting.”

Mandana Dayani (right), shown here with Meghan, is also departing Archewell after less than a year at the helm.
mandanadayani / Instagram

It is unknown if the Duke and Duchess of Sussex will continue their contract with Spotify, but a highly placed industry insider told Page Six: “I believe they would be content if their contracts with Netflix and Spotify were terminated. The issue then becomes, “How else will they generate revenue?”

According to sources cited by Page Six, Sananès’ move is part of a bigger expansion strategy for the Sussexes’ foundation.

Archewell stated in a statement that Ms. Dayani was hired during [the Sussexes’] maternity leave to advance the firm and its projects… Her departure was amicably agreed upon, with The Duke and Duchess now assuming full control of their enterprise. There will be no successor for this post, and Ms. Dayani completely supports The Duke and Duchess in their new leadership duties; they remain friends.”

The announcement comes days after it was revealed that Mandana Dayani, who led Archewell for less than 18 months, had resigned by mutual consent and would not be replaced.

Dayani’s departure was in the works early this year, according to Page Six, and she remains close friends with the pair.

Sananès is in charge of creating Meghan Markle’s television program. It is unknown if it will return for a second season.

A person familiar with her remarked, “Mandana is a smart woman who will remain in the public eye. She was usually seen with Harry and Meghan looking polished and composed while wearing heels. She has her own brand and is an expert in her field.”

This means that the Sussexes will assume “complete control” of their firm as they prepare to debut their Netflix series on Thursday and Harry’s biography in January.

Several upcoming events will put the couple in the public eye, including Tuesday’s Ripple of Hope Awards in Manhattan, where they will be honored for having the “moral courage” to take a stand against “structural racism” within the monarchy, according to Kerry Kennedy, president of Robert F. Kennedy Human Rights, the non-profit organization named after her father.