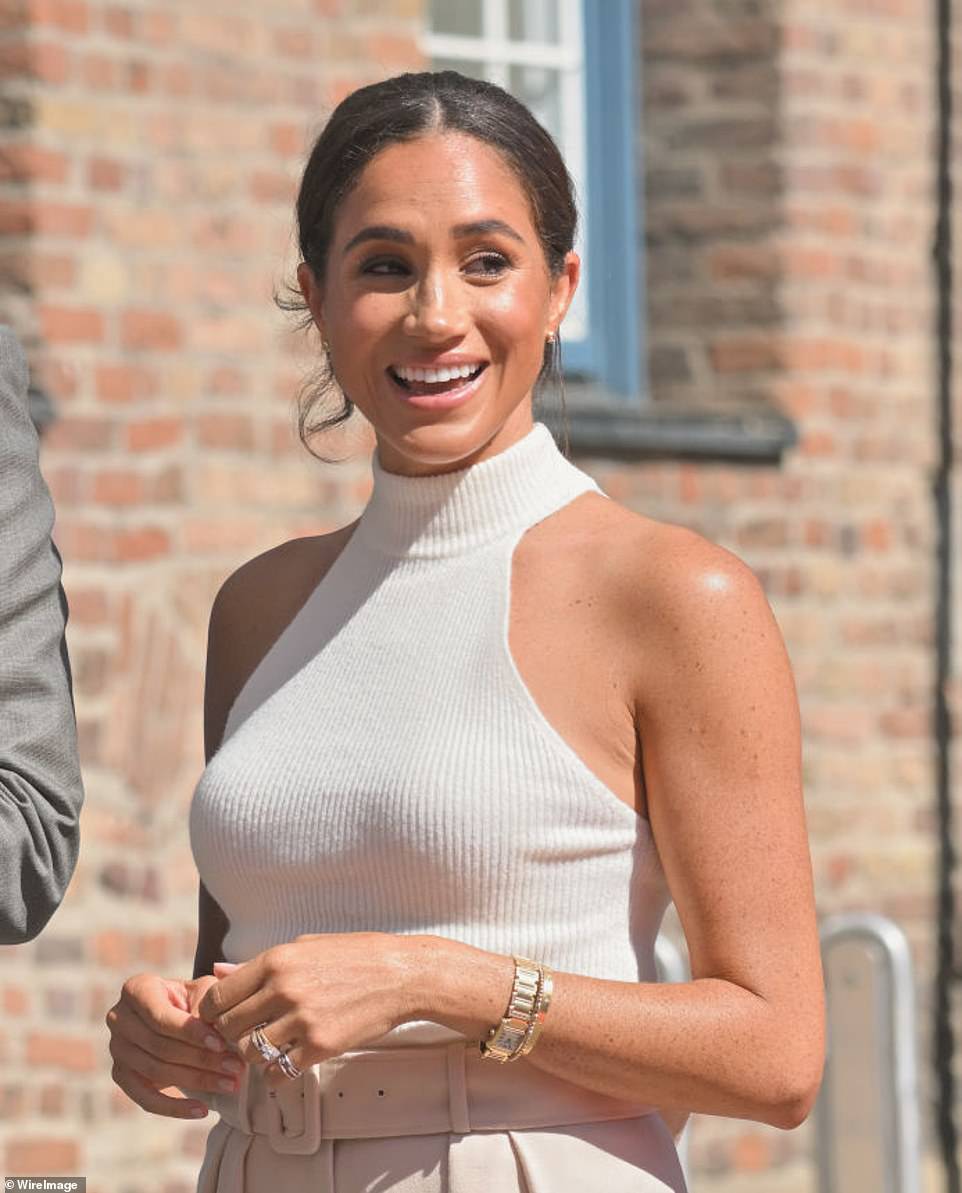 Meghan Markle’s most recent Archetypes podcast discusses how women activists are frequently subjected to sexism by those who believe, “Here we go again.”

The Duchess of Sussex converses with British actress and influencer Jameela Jamil and X-Men and 24 actress Shohreh Aghdashloo.

Meghan and her guests examine why women’s activism and ‘great ideals’ are frequently used against them to make them ‘feel small.’

She discusses her friendship with Miss Jamil, with whom she has spent time in the United Kingdom and the United States, and they debate “diet culture” and social media trolling.

Why is it regarded as “how dare she” and why do some feel the need to make a woman with strong beliefs feel small?’ she asked at the beginning of the episode.

I began to observe an almost automatic eye roll whenever someone mentioned a woman fighting for a cause, as if to say, “Here she goes again,” or perhaps, “Why can’t she just sit down?”

‘The underlying annoyance that seems to encircle women in activism astounded me, and I could not wrap my head around it. I still can’t’.

Meghan Markle’s most recent podcast for Archetypes discusses how women activists are frequently subjected to sexism by those who believe, “Here she goes again.”

Meghan Markle stated last week that’strong-minded women’ are labeled ‘difficult’ because it is a codeword for ‘b*tch’ and that ‘although not everyone will like you, the goal can be for everyone to appreciate you’

The Duchess of Sussex stated in her most recent Archetypes podcast for Spotify that the ‘B-word’ is used to ‘gaslight’ people who know what they want.

Meghan also stated that she dislikes the epithet “pushy” and that she modifies her behavior to avoid being regarded as such.

Meghan explains what people mean when they use the term “b*tch”: “When they use this highly charged term, they are expressing that this lady is problematic.

Which is either merely a euphemism or not even a euphemism. It is actually a codename for the B-word.

In reference to the word “difficult” as a descriptor for women, she continued, “My friend told me that there comes a time when you realize that not everyone is going to like you; the goal cannot be for everyone to like you, but it may be for them to respect you.”

Meghan stated that her friends are’reclaiming’ and ‘loving’ the ‘B-word,’ but she refuses to use it on her podcast, instead referring to it as the ‘B-word’ or spelling it out for listeners. She stated that she would never use it to refer to a male dog.

She recalled, “When I was a child, people would say, “Sticks and stones may break your bones, but names can never hurt you.” Well, that was a complete fabrication. Obviously, names hurt. But what happens when we use that hurt to fuel our mission, when the B-word is shouted with one intention, but you are able to let it go and remind yourself of all the other words with a ‘B’ that more accurately describe you? Gorgeous, blessed, brilliant, alluring, delightful, bedazzling. Choose your option.

This week, Meghan chatted with business executives and entrepreneurs, including Mellody Hobson, the first black woman to head an S&P 500 firm and the chairwoman of Starbucks. She is married to the inventor of Star Wars, George Lucas.

The episode titled “To ‘B’ or not to ‘B'” also features the makeup mogul and Meghan’s friend Victoria Jackson. In Montecito, California, Miss Jackson is part of the Sussexes’ “close-knit group of pals.” In the 1970s, she described being ‘raped and stabbed’ by the renowned ‘pillowcase rapist’

After her daughter was diagnosed with a rare and frequently fatal eye ailment, Miss Jackson built a $1 billion business and subsequently transitioned into medical research.

Meghan’s new episode “To “B” or not to “B” is about the word “b**ch” and how it and other derogatory terms are used to demean women.

On the show, Meghan interviews business leaders and entrepreneurs, such as Mellody Hobson, the chairwoman of Starbucks, and her close friend, the makeup mogul Victoria Jackson.

During the summer, Meghan wishes she was “living La Dolce Vita” with her friend Mellody Hobson.

Meghan began her talk with Miss Hobson by exclaiming, “Oh, it’s so good to see you!” Before we enter… How is the summer?

The podcast has been adjusted so that Miss Hobson’s reaction is not audible.

Meghan, though, says, “I am very envious.” I wish I could have experienced La Dolce Vita with you.

The Sussexes’ pseudo-royal tour of Europe, which began the first weekend of September, dominated the remainder of the summer for the Duchess of Sussex.

A few days later, on Thursday, September 8, the Queen passed away, extending her and Prince Harry’s stay by two weeks.

Meghan has tackled similar topics with her Archetypes guests, such as what it means to be a “diva” with Mariah Carey and the myth surrounding singletons with Mindy Kaling.

In the most recent episode of her Archetypes series, she disclosed that her favorite childhood television show was the game show Jeopardy!

The seventh episode of the Duchess of Sussex’s podcast was themed ‘To “B” or not to “B”‘ and included the make-up mogul Victoria Jackson and the chairwoman of Starbucks, Mellody Hobson.

During the introduction to the show, the mother of two stated that she spent a great deal of time in front of the television during her childhood.

The former actress went on to say that Jeopardy was her favorite program as a child, adding, “I would eat my supper on a TV tray in front of the screen, watching each category with bated breath and extreme focus in an attempt to absorb whatever data they were shooting off in the form of questions.”

She stated that Alex Trebek was a “daily part of her life,” stating that she received condolences after his death in November 2020.

Meghan began the podcast by stating, “At this point in the series, I believe it’s been established that I spent a lot of time watching television as a child.

I adored movies and television. As we continue to uncover with Archetypes, many of my favorite shows are impacted by popular culture and the media.

My generation, who grew up in the 1980s and 1990s, was raised with television in the same way that this age is nurtured with social media.

“We lacked that at the time. No Instagram or TikTok existed. Even shows could not be recorded.

‘Except if you had a blank VHS tape that you could race to load at the precise moment.

So you would hope to not miss your favorite program. For Gen Z listeners, you’ll have to Google or, I suppose, Tik-Tok to figure out what I’m talking about.

‘But for those of you who recall these times, you’ll also recall the shows you eagerly anticipated. Now, this was Jeopardy for me.’

Meghan claimed that Jeopardy host Alex Trebek was a “daily part of her life” and that she received condolences after his death in November 2020. (pictured)

The last episode of the Duchess of Sussex’s Spotify podcast included Sophie Trudeau, the wife of Canadian Prime Minister Justin Trudeau. The friends discussed the difficulties of parenting and dating two famous men.

The couple expressed the “crushing shame” associated with being a mother in the public glare.

Meghan disclosed that she hosted a pool party for Mrs. Trudeau this summer, where they ‘giggled like schoolgirls’ and sipped champagne on the terrace of her Montecito estate.

On episode eight of her Archetypes show, titled ‘Good Wife/Bad Wife, Good Mom/Bad Mom,’ Meghan also interviewed comedian Pamela Adlon, who became a British citizen in 2020 and is best known as the voice of Bobby Hill in animated comedy series King of the Hill.

Meghan also disclosed that she studied for the Life in the UK examination. Meghan is not considered to be a British citizen, having apparently abandoned the notion after Megxit in 2020, despite being born and residing in Los Angeles.

After marrying Harry, 38, in 2018, she did not dwell in the United Kingdom for the three years required to obtain spouse citizenship, according to experts. She entered the country in November 2017 and departed in December 2019.

The Duchess of Sussex remarked, “That citizenship test is very difficult.” I recall uttering the phrase “Oh my goodness” while studying for the exam. I would inquire with my husband, ‘Did you know this?’ Did you already know?’ He would respond, ‘I had no idea.’

She did not elaborate on whether she actually took the exam or merely prepared for it.

But Ms. Adlon remarked, “I believe they made it more difficult for you.” They said, ‘We’re really going to put up barriers for this one.’

Sophie Trudeau was the featured interviewee on Meghan Markle’s most recent podcast episode. Both are captured in a photobooth at the 2016 Canadian Arts & Fashion Awards (CAFA) at Toronto’s Soho House.

Meghan disclosed that she prepared for the UK citizenship test – and that Harry struggled with some of the questions – but it has been widely reported that she did not take the exam.

Before qualifying for citizenship, Meghan would have required to pass the Life in the UK Test, which costs £50 each attempt and has a pass mark of 75%.

The 45-minute exam consists of 24 multiple-choice questions concerning British laws and the legal system, working in the country, its history and culture, and other aspects of British life. It may be rebooked an infinite number of times, but applicants are required to pay each time.

It may also include questions regarding the Royal Family, of which she is still a member, such as which monarch was executed in 1649 and who founded the Church of England.

In 2017, following the confirmation of her engagement to Prince Harry, Buckingham Palace announced that the former Suits star would become a British citizen.

In 2020, however, the Sussexes left the working monarchy and travelled to the United States via Canada, amid rumors that Meghan had abandoned the process.