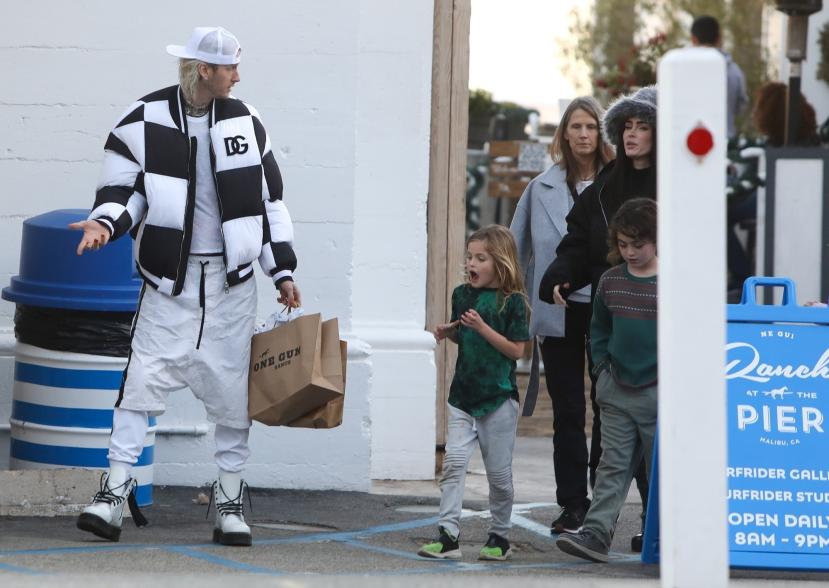 Megan Fox and Machine Gun Kelly may have waited until the last minute to do their Christmas shopping.

On Wednesday afternoon, the engaged couple was seen in Malibu with the actress’ mother, Gloria Darlene, and the three children Fox shares with her ex-husband, Brian Austin Green.

The musician, whose real name is Colson Baker, was spotted carrying numerous shopping bags, followed by Noah, 10, Bodhi, 8, and Journey, 6.

Several chains around his neck and a backwards cap rounded off his attire.

Fox, on the other hand, dazzled in an oversized black puffer, dark thin jeans, a matching turtleneck, and tall black boots.

The 36-year-old “Jennifer’s Body” actress topped off her ensemble with a grey, fuzzy bucket hat, similar to the pink feathered hat

Fox, 49, and Green, 49, have been co-parenting their children since their divorce in 2020, alternating who spends the holidays with their children.

In a November interview, the “BH90210” alum stated, “We’re open to change.” “Both she and I are very aware that our schedules are ridiculous. Therefore, when we do have time, we should value it. It’s a wonderful thing, and we encourage the other parent to have time.”

Green continued by stating that he is fine with his ex-wife potentially having another child with her January-proposing boyfriend.

Their three children are “crazy” with Zane, the actor’s 5-month-old baby with girlfriend Sharna Burgess, the actor added, describing the situation as “wonderful.”

Green continued, “It would be the same for them with [Megan’s future child].” “Leaving and coming to her place is difficult for them because they miss Zane so much. “There’s something amazing about being able to visit her home and have the same experience.”

The actor, who began dating Burgess, 37, in October 2020, has a 20-year-old kid with ex-girlfriend Vanessa Marcil.