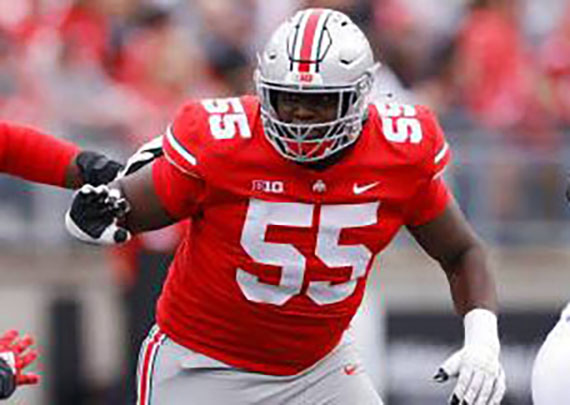 ATLANTA — Matthew Jones will be familiar with being in the spotlight.

Two years ago, he made his second College Football Playoff appearance of his career. On Saturday night, the fifth-year senior will be tasked with helping Ohio State slow down Jalen Carter, one of the best defensive players in the nation and a potential first-round NFL draft pick.

“He is a fantastic player; everything he does is explosive. Overall, he is excellent. Jones, a native of Brooklyn and the starting right guard for the Ohio State Buckeyes, stated, “I do look forward to facing him.” “This is a great opportunity. I hold myself to a high standard and do whatever is necessary to execute. I will give this my all.”

Jones feels prepared for the challenge after weeks of intensive preparation. On November 19, he suffered what offensive coordinator Kevin Wilson labeled a right foot injury and missed the game against Michigan. According to Pro Football Focus, Jones has played 658 snaps for the Buckeyes this season, earning a grade of 77.9, and has not allowed a sack.

“Since I’ve had time to heal and accomplish what I needed to in the few weeks we had, I feel terrific,” he remarked.

The 6-foot-4, 315-pound Jones is the only New York City native to start for one of the four teams in the playoffs. The former top-100 recruit from Erasmus Hall is proud of this accomplishment.

“This is a fortunate opportunity,” he remarked. “Not everyone has the opportunity I currently possess. I must make the most of it. It means a great deal to have the opportunity to be here and to be recognized as a starter and an essential member of the squad.

When asked about their condition, Georgia head coach Kirby Smart replied, “We’ll see on Saturday.” “Hoping to get both of them on the field and hoping they can both play.”

Neither athlete was willing to divulge much information on their advancement, deferring the inquiries to Smart. McConkey is second among Bulldogs receivers with 51 catches for 675 yards and five touchdowns. McClendon has begun 37 consecutive games for Georgia.

»Matthew Jones is excited to face Jalen Carter of Georgia«