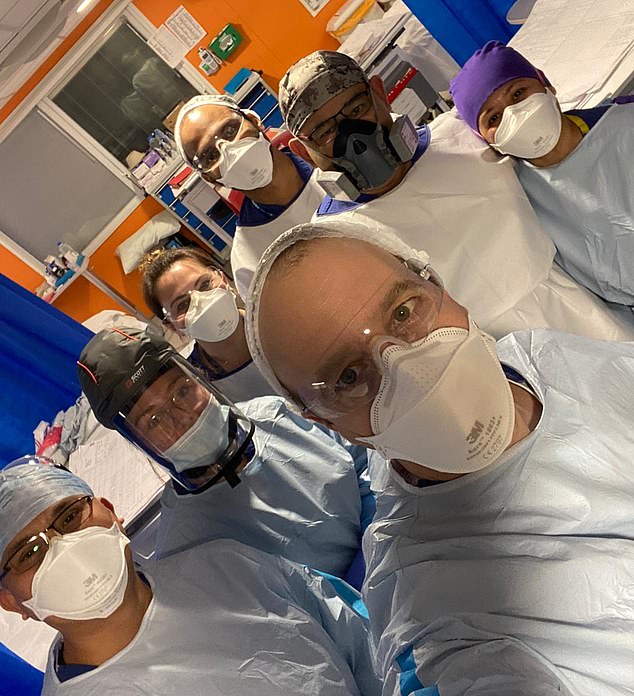 Matt Hancock reported the terrifying moment a Covid patient was placed on a ventilator as a physician remarked, “I don’t think we’ll see him again.”

Matt Hancock with staff at Basildon hospital in January 2021

In January 2021, the former health secretary accompanied physicians on the night shift at Basildon Hospital, one of the most under-pressure institutions at the time.

The “unbelievably horrible scene” was one of innumerable atrocities encountered by NHS frontline personnel throughout the epidemic, which has claimed 212,000 lives in the United Kingdom.

At the time, there were still 37,000 patients being treated for Covid in hospitals, and employees faced the dreary routine of caring for patients in their dying days.

Matt Hancock with staff at Basildon hospital in January 2021

Mr. Hancock adds, “In critical care, I observed a patient agree to undergo intubation because his blood oxygen levels were unsustainable.”

He met with the doctor, who stated, “We want to insert a tube because we don’t believe you would survive without it.”

His chances of awakening were fifty-fifty. He was aware. It was an unimaginably terrible moment.

Matt Hancock ‘donned full PPE and got stuck in’

He hesitantly consented, and within one minute he was completely unconscious on the ventilator.

The physician next to me stated, “I doubt we’ll see him again.”

Another registrar contacted the patient’s wife to inform her that her husband had been intubated and told the minister, “We’re doing this, we all know it’s our responsibility, we’re managing with a second wave – but we can’t handle a third.”

“Then he burst into tears,” Mr. Hancock adds, adding that his night shift at the hospital in Essex, during which he wore full PPE, left him “totally exhausted.”

The episode also provides context for disputes occurring at the highest levels of government.

They were pitted against Covid hawks such as then-chancellor Rishi Sunak, who exploited the “horror show” of the public finances to argue against harsher limits.

Matt Hancock “put on full PPE and began to work.”

Former Health Secretary Jeremy Hunt remarked that he “saw firsthand the terrible pressure our NHS is under.”