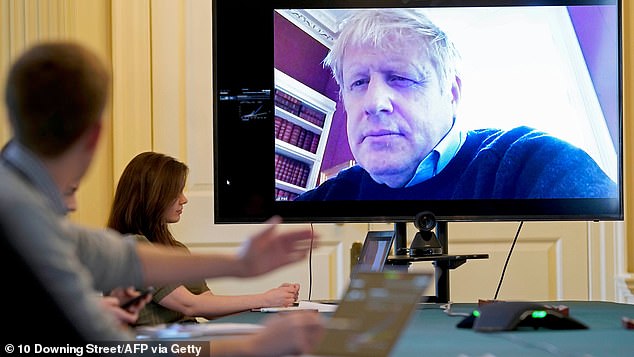 Matt Hancock disclosed that the Cabinet drafted a secret “worst-case scenario” plan to replace Boris Johnson if he died of Covid in early 2020.

If the worst had occurred, according to the former health secretary’s pandemic diaries, senior ministers would have voted on a replacement, notified the Queen, and “rallied round.”

Later, the Prime Minister confessed how near to death he had been after catching Covid, stating that he was given “liters and liters” of emergency oxygen while he battled to breathe in critical care. He disclosed that physicians had prepared for his death.

In his scathing new diaries, the former health secretary stated that in the event of Mr. Johnson’s demise, the country ‘couldn’t possibly’ have a normal Conservative Party leadership election, which typically takes months, and that the new leader would have been chosen in a ‘quick decision’ by the twenty or so Cabinet members.

Matt Hancock has disclosed that the Cabinet has a secret “worst-case scenario” plan to replace Boris Johnson if he dies of Covid in early 2020.

If the worst had occurred, according to the former health secretary’s pandemic diaries, senior ministers would have voted on a replacement, notified the Queen, and “rallied round.”

Mr. Hancock stated that the admittance of Mr. Johnson to the intensive care unit of St. Thomas’ Hospital in London “shocked” the whole government.

Ministers were informed that there was a 50% possibility he would require a ventilator and that at the time, in April 2020, 50% of patients who required ventilators perished.

The fast deterioration of the former prime minister’s health prompted pharmaceutical companies from across the world to flood Mr. Hancock’s office at the Department of Health with offers of experimental treatments.

Mr. Johnson tested positive for Covid on March 27, soon after the United Kingdom was placed under lockdown.

He was the first international leader to reveal he had the virus and one of many prominent individuals, including Professor Chris Whitty, who test positive on the same day.

His first answer was a humorous video of himself “working from home” in which he cited “minor symptoms.”

In an entry almost a week later, Mr. Hancock’s notes that Mr. Johnson was coughing throughout the call and adds, “He’s really nervous about appearing weak.”

“A general’s duty is to exhibit strength, not weakness,” the prime minister had admonished him.

Due to his ‘persistent’ symptoms, he was sent to the hospital on April 5 for examinations as a precaution.

Mr. Hancock said that the Prime Minister “is still feverishly messaging everyone.” The next day, he was taken to critical care and remained there for four nights.

As soon as the news broke, pharmaceutical companies began phoning my office with offers of experimental medications.

In contrast to nations such as the United States, the British constitution lacks a specific procedure for replacing a leader who dies in office.

Later, the Prime Minister confessed how near to death he had been after catching Covid, stating that he was given “liters and liters” of emergency oxygen while he battled to breathe in critical care. He disclosed that physicians had prepared for his death.

Mr. Hancock wrote in his notebook on April 8: ‘Nobody talks about it, but there is a ‘worst-case scenario’ strategy in place if Boris fails.

We couldn’t possible hold a normal Conservative Party leadership contest, therefore the Cabinet would have to make a swift choice, advise the Queen, and unite behind the new leader.

Carrie, who was eight months pregnant with their first child Wilfred at the time, was left to isolate herself.

According to official guidance at the time, pregnant women in their third trimester were required to strictly adhere to social distancing recommendations.

Later, Mr. Johnson, speaking after the birth of Wilfred, remarked of his near-death experience, “I cannot dispute that it was a difficult time.”

Mr. Hancock recounts his anxieties when his ‘close colleague and friend’ was in ICU: ‘It is difficult not to like Boris if you spend time with him. He is infinitely amusing and fascinating, and he thinks uniquely and laterally more than anybody I know.

This can be problematic when linear thinking is necessary, yet no one is better than him at seeing the larger picture.

In 1865, Lord Palmerston was the last British prime minister to die in office. His successor was selected by a committee of party leaders and the Queen.