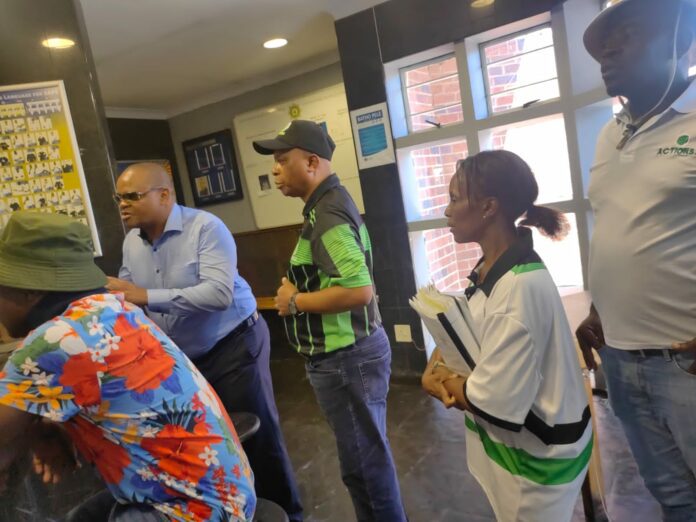 Community members in Primrose, Ekurhuleni informed the party that they feared a certain building in the vicinity had been hijacked, stating that the alleged hijackers intimidate and harass the occupants.

Mashaba took immediate action upon receiving the tip and drove to the region near Germiston. Tlhogi Moseki, the former Ekurhuleni MMC for community safety, accompanied him.

Mashaba stated, “On Wednesday morning, I was accompanied by ActionSA councillor Tlhogi Moseki to investigate reports of a hijacked building in Primrose.”

“Upon arrival, we were informed that the property had been seized by an accused foreign national without documentation. We were able to get in touch with the property’s owner, who resides abroad, and he confirmed that the structure had actually been seized.”

In addition to claims that tenants are regularly exposed to harassment and intimidation, community members informed the ActionSA leader that a lady had died in the building.

This led to the opening of a murder investigation, although little progress was made. Subsequently, Councillor Moseki and I visited with the commander of the Primrose police station, Colonel Nzuza, to discuss our concerns and request an update.

“Colonel Nzuza and his squad acted swiftly, which resulted in the suspect’s apprehension. During our inquiry, we learned that the hijacking of the first property we visited was not an isolated incidence, as the same hijackers may have engaged in similar illegal acts at other locations.”

Mashaba added that he had asked with Home Affairs Minister Aaron Motsoaledi to intercede in the situation, as the alleged hijacker is believed to be an illegal immigrant.

“ActionSA believes that the rule of law in South African communities, including our existing immigration rules, should be reinstated. “We cannot allow widespread lawlessness to continue unchecked,” Mashaba stated.

“ActionSA will continue to watch this issue and is prepared to collaborate with the City of Ekurhuleni, law enforcement authorities, and the Department of Home Affairs to restore the rule of law.

“We are appreciative that law-abiding citizens informed ActionSA that there were criminals in their community; such initiative is applauded.”

»Mashaba assists the police in capturing a suspected building hijacker«