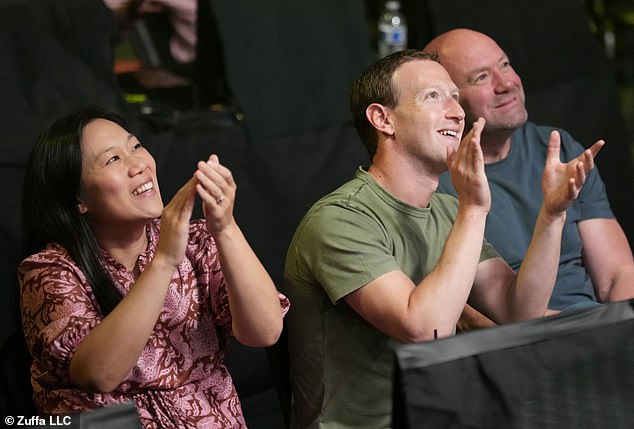 At a UFC bout in Las Vegas on Saturday, Priscilla Chan, the wife of Mark Zuckerberg, stole the show by reacting in terror to the bloody battle that was taking place only feet from her front-row seat.

At the UFC Vegas 61 competition, Chan, 37, put on an energetic performance as she cowered behind her hands at the edge of the cage while two competitors traded punches and kicks.

A moment later, she looked to gasp as she covered her eyes once again after peeking out from between her fingers at the struggle.

Chan’s rich husband, who founded Facebook, was sat next to her, and throughout the evening, he displayed opposite joyous reactions.

In spite of the fact that the pair allegedly hired out the whole venue for themselves and their invited guests, Chan and Zuckerberg were two of the few people to attend the fight on Saturday.

However, the battle was televised, and anytime the action went to Zuckerberg and Chan’s part of the ring, spectators could see them.

Chan’s shocked look was immediately picked up by keen-eyed observers, who tweeted their delight.

One person who shared the video commented, “I don’t believe Mark Zuckerberg’s wife realized what she was getting into tonight.”

Another user posted with a sobbing emoji, “Mark Zuckerberg’s wife has never seen a fight in her life.”

Chan wasn’t the only reason the fight made news; numerous UFC competitors also complained about Zuckerberg’s decision to book out the venue at the cost of spectators online.

The fighter Nathan Querry tweeted in agreement, saying, “The UFC’s lack of modernity in thinking this is a fantastic marketing opportunity shows. I was around then when the fights were the major attraction. not the advertiser. And most definitely not a spectator at the bouts.