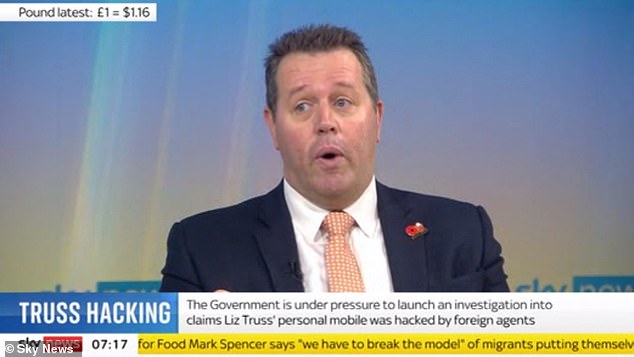 Following news that Liz Truss’ phone had been hacked, a minister made light of the situation by joking that “some small chap in China” may be listening to him and his wife.

All ministers, according to Mark Spencer, use “personal” phones, but he said he was “careful” and never spoke about official matters.

The remarks followed astonishing disclosures in the Mail on Sunday that operatives suspected of working for the Kremlin had hacked the former prime minister’s personal mobile phone.

When she served as Foreign Secretary, cyberspies are said to have had access to both private chats with a close ally, Kwasi Kwarteng, as well as top-secret communications with important foreign allies.

According to a person who spoke to the publication, the phone was so severely hacked that it has now been locked up within a secure government building.

When Boris Johnson was prime minister, it is said that he was told, but a press blackout was implemented to limit the harm.

Suella Braverman, the home secretary, is also involved in a separate dispute regarding the dissemination of sensitive government material through her personal email account.

All ministers engaged in national security, according to a Whitehall source, will be required to undergo new security services training this week “to ensure everyone is aware of how this data should be handled.”

Ministers will be advised not to do official business on their personal mobile phones since they might become a target of adversarial nations like Iran, North Korea, China, and Russia.

According to Mr. Spencer, the security services provide ministers “quite a lot of information” on “what to do and what not to do,” according to Sky News.

He denied using his government phone for personal business when asked whether he did so.

You do get quite a bit of instruction from the security services on what to do and what not to do, he said. It’s crucial to do it correctly, as a result.

I don’t want to speak too much about it because I don’t want to reveal all the details of that briefing to the public. However, you do get a lot of advice on what is suitable and improper for a government minister if you have that position.

The “super-careful,” he said. We all use our own phones to communicate. You know, you simply have to be cautious about what information you use on which phone… I call my wife, maybe there’s some small dude in China listening to the chat between me and my wife…

It’s important to exercise caution since many individuals wish to hurt our nation.

Former joint intelligence committee chairperson Pauline Neville-Jones of the United Kingdom stated yesterday that she was “not at all tolerant of the concept that it’s OK for ministers to use private mobile phones.”