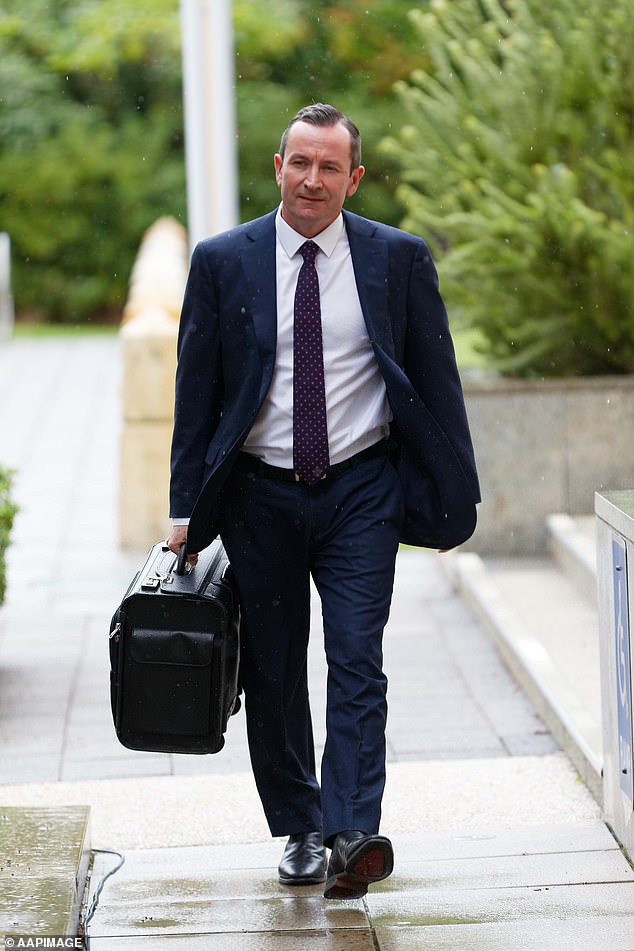 Western Australia has posted a nation-leading $5.7 billion budget surplus, driven by what Premier Mark McGowan describes as one of the strongest economies in the world.

The 2021/22 surplus – lower than some forecasts but higher than the $2.4 billion mid-year estimate – would make other state treasurers ‘green with envy’, Mr McGowan noted when releasing the budget on Thursday.

Announcing his government’s 2022/23 outlook, the premier sent a pointed message about economic management just a week out from the federal election.

It is undoubtedly and unashamedly a Labor budget. It is in surplus, and pays down Liberal and National debt. Because that’s what Labor governments do,’ he said.

Mr McGowan suggested other state governments could learn from WA.

‘I suspect they’ll be green with envy. Some of them will look like they’ve swallowed a bumblebee,’ he said of his national counterparts.

‘All the other states have not run their finances as well as Western Australia.’

The budget windfall is driven by better-than-expected tax receipts, a lift in the iron ore price since the December mid-year budget review, and an increase in the national GST pool.

The state will bring in $41.9 billion in revenue this year, with iron ore royalties ($10.3 billion) and payroll tax ($4.4 billion) the largest contributors.

Treasury officials used a conservative $77.5 US dollars/tonne price of iron ore for the 2022/23 budget.

The government will use the healthy budget numbers to fund measures to ease cost-of-living pressures, infrastructure projects and to pay down net debt.

The budget includes $445 million to fund a $400 household electricity subsidy. The credit would begin in July and will not be means tested.

The Western Australian Council of Social Service said the support could have been better targeted to help low-income households and even asked recipients to pass on the windfall.

‘If you don’t need that $400 in relief, think about donating it to a charity in your area. We’re seeing huge increases in demand as cost of living rises,’ president Louise Giolitto said.

Amid calls to freeze government fees and charges as inflation surges, Mr McGowan said an average household will pay 3.8 per cent less overall during the coming 12 months.

The COVID-19 pandemic response gets a further $1.6 billion, including $635 million to continue the free rapid antigen test program.

There is a further $2.5 billion for the health system, including a $252 million ‘reform package’ for emergency departments struggling with ambulance ramping.

In a bid to ease acute housing shortages, particularly for renters, build-to-rent developers will be eligible for a 50 per cent land tax concession.

There is also $505 million in new funding to expand primary schools and $350 million to set up a Remote Communities Fund.

The budget will see net debt fall below $30 billion, with the resulting drop in interest payments saving the government about $1 billion each year

Pointing to combined economic growth of 7.2 per cent since January 2020, Mr McGowan said this vindicates the government’s controversial hard border policy, which lifted on March 5.

‘Across the two years of the pandemic, WA has achieved the best health outcomes, the best social outcomes and the best economic outcomes in Australia, and potentially the world,’ the premier said.

‘The good financial position the state finds itself in is not the product of good financial management, but of record revenues, the only part of which the premier can claim credit for is higher state taxation,’ he said.

The government will reduce net debt by more than $1 billion dollars this financial year, but Dr Thomas said the premier should have gone further.