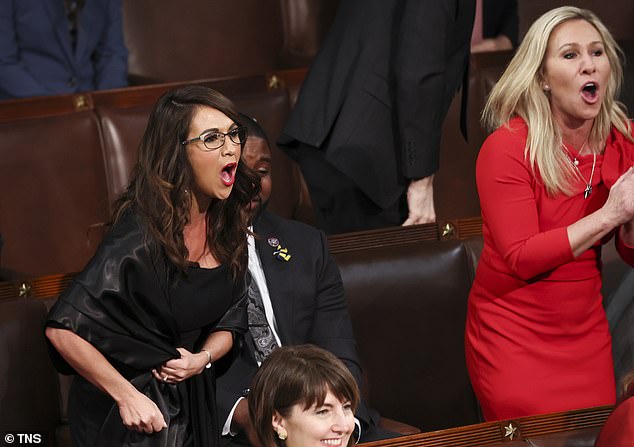 Marjorie Taylor Greene and Lauren Boebert, two Trump loyalists on the hard right of the Republican Party, almost came to blows in an argument about white nationalism, according to a new report.

The two are often seen as part of the same firebrand wing of the party – happy to stoke outrage and say almost anything to generate headlines.

But Politico reports that their loathing for each other boiled over during a meeting of the House Freedom Caucus in March.

Insiders say Boebert is more of a team player and hates being linked with her Georgia colleague.

When the House Freedom Caucus board of directors gathered at its meeting spot near the Capitol, the two got into an argument about Greene’s appearance at a event organized by a known white nationalist.

A Republican lawmaker described fearing that their tussle might go beyond words and turn into a physical fight if another board member had not intervened.

Boebert and MTG scream ‘Build the Wall’ at U.S. President Joe Biden as he delivers the State of the Union address on March 1, 2022

GOP Lauren Boebert says reject Bidenism and embrace America First
ne, a Republican from Georgia, appeared as a surprise guest at the America First Political Action Conference in Orlando, an event organized by Nick Fuentes, a white nationalist who was permanently suspended from YouTube for anti-Semitic hate speech in 2020.

After speaking at the event, Greene posed in a photo with Fuentes and right-wing pundit Michelle Malkin, but when questioned about her appearance at AFPAC and relationship with Fuentes, Greene denied she knew him.

Greene had a controversial record, even before entering Congress.

She actively shared the extremist QAnon ideology, which is centered on false claims of a cabal of powerful people abusing children.

That history led the US House of Representatives to strip her of committee membership last year.

For her part, Boebert has frequently tangled with members of the Democratic liberal ‘Squad,’ including last year suggesting that Muslim Rep. Ilhan Omar might be a terrorist.

Lauren Boebert says Ilhan Omar hung up on her during phone callAt times, the pair have been on the same page, such as during the State of the Union address. They both stood to heckle President Joe Bien, shouting: ‘Build the war.’

But their argument was cited as showing a wider conflict within the House Freedom Caucus. It began life in 2015 with the aim of prodding Republican leadership to the right, but evolved into a Trump cheerleader squad. the row is seen by some as emblematic of divides within the House Freedom Caucus about its direction, and whether it should return to its roots as an advocate of small government

There have been splits about how to respond to recordings of House Minority Leader Kevin McCarthy saying that Trump should resign in the wake of the Capitol riot, and about whether the grouping should return to its origins as small-government advocates.

‘I like the principles that the Freedom Caucus was founded on, but I think that if we can’t work together as a group and push our ideas in a civil manner, then we’re not going to be very effective.’