Skip to content
Home » News » News » Mariupol steelworks: One woman’s account of 60 days in the bunker from HELL 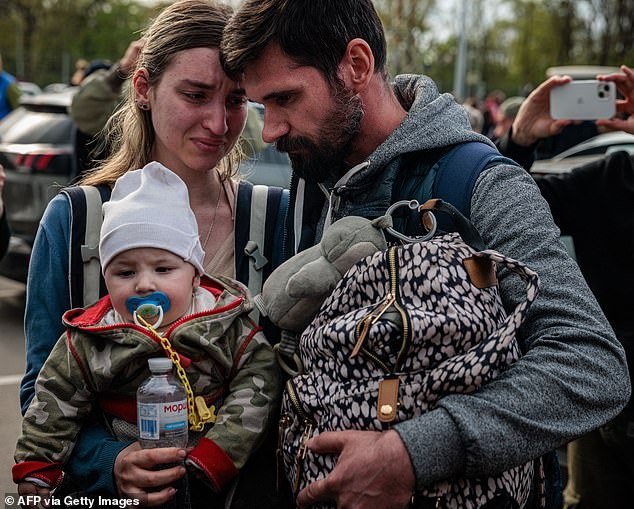 Anna Zaitseva, 24, who had taken refuge there with her family, took to eating just once a day. As the days passed and their predicament got even more serious, she and her mother Larisa both lost 20lb in weight. Her father Oleg lost three stone.

Shortages became so acute that some of the women started to lose their teeth and quarrels broke out over who should get what.

I would sometimes pretend that I wasn’t hungry and take even less food, so I could give some more to my father and my mother,’ Anna told me yesterday at the hotel she is staying at in the town of Zaporizhzhia – 140 miles from the hellhole she lived in for eight long weeks.

Her plight was made all the more traumatic by the need to care for her six-month-old son Svyatoslav.

‘We used to light some candles to heat up the water for his baby formula,’ she says. ‘There was no drinking water so we would have to use rainwater or melted snow.’

Svyatoslav was one of 18 children in the bunker and the hungrier they got, the more obsessed with food they became. ‘All the time they were drawing pictures of food, or playing as if they were in a supermarket and asking, ‘Anna, do you want to buy tomatoes? Do you want to buy apples?’ ‘

In the absence of running water, men would climb the spiral staircase that led to the surface to collect rainwater from puddles.

This was a perilous undertaking as the Russians used drones to monitor their foraging missions and then targeted them with cluster bombs.

One man was really badly hurt, but we had almost no medication,’ says Anna. ‘He had fragments of a bomb in his leg and he could no longer feel it any more.’ The only usable lavatory was on the ground floor, which meant that even something as simple as going to the toilet carried the risk of death.

‘That part of the building was exposed to shelling or explosions at any moment,’ says Anna. ‘Most of the walls had been turned into rubble.

‘Every time there was an explosion, there was a vibration. It would wash over you like a wave, you know, like you were standing on a ship.’

The ever-present atmosphere of terror was exacerbated by rumours that the Russians were attacking the steelworks with phosphorous bombs which consist of a self-igniting chemical that can burn at 4,800F once it makes contact with air.

As their hunger pangs worsened, Anna and other women would have nightmares about Vladimir Putin’s troops finding their shelter and killing everybody inside. ‘People would scream out in the middle of night, ‘Help Me’,’ she says.

‘They were dreaming that the Russians were already here.’ The lucky ones slept on wooden bunk beds stacked three high, while the rest had to make do with polystyrene mattresses scavenged from the floors above.

To while away the hours, Anna would sing to her son and dream of happier times with her husband Kirill, 22, a former soldier who had re-enlisted in the Ukrainian army days after Putin’s tanks rolled across the border.

‘I thought about our honeymoon in Kyiv,’ says the French teacher. ‘I would watch the wedding videos in my head to distract myself and not think about all this bad stuff.’

Apart from the sound of explosions, the only noise was the hum of the small generator that provided faint yet precious light.

This was some consolation to little Svyatoslav, whose name translates as ‘the one who worships light’. ‘All the time I was feeling guilty,’ Anna says. ‘It was not my child’s decision to be here.’

Their hopes waned and their frustration grew after promises by the Russians to allow those trapped inside to escape through humanitarian corridors failed to materialise.

But on April 30, their prayers were answered. An evacuation was to be arranged after all. Anna lights up as she describes the joy of feeling the wind in her hair and the warmth of the sun on her skin for the first time after two months entombed underground.

Her joy was to be short-lived. After being taken to one of the Russians’ so-called ‘filtration camps’, two female Russian soldiers ordered her to strip naked. This humiliation was followed by an interrogation by a man in a balaclava.

But even after spending so much time in that bunker, Anna had not lost her sense of humour. When a bearded Russian officer grilled her on whether her husband had any Nazi tattoos, she replied: ‘I don’t know. We only like making love with the lights off.’

Her encounter with the brutish Russian military was nothing compared to what happened next.

Once she was released to her hotel, the Ukrainian military informed her that her husband had been badly injured. Kirill had been shot in both legs, and bomb fragments were lodged under his skin. ‘Will you still love me, even if I can never walk again?’ he asked Anna when she finally managed to reach him by phone on Wednesday.

‘Are you crazy? I will always love you,’ Anna replied. ‘Just get out of there alive, please.’

‘Now you have a baby. You need to choose another profession.

‘You can choose anything you want, but not military service,’ Anna told Kirill. ‘No more army. No more of this bullsh*t.’

On that October day, the happiest one of their lives, war seemed a million miles away. The horrors of Azovstal had yet to unfold.

Kirill quit the army and – ironically – got a job as a security guard at the local Azovstal plant.

The night before the invasion, the couple ate pizza and watched Bridget Jones’s Diary on Netflix. At 6am the next day, Anna woke up to feed Svyatoslav and as she flicked through her phone, she read a Facebook post by a friend in Kyiv, who had written that the Ukrainian capital was under attack.

‘I was crying and asked what we should do,’ she recalls. He might not have said so at the time, but Kirill immediately knew he would break his promise to his wife and put on his uniform once more.

The next day, as Putin’s forces advanced on Mariupol, the city where they had grown up and fallen in love, a bomb exploded just three miles from their home, shaking the walls and rattling the windows.

Fearing that their apartment block’s basement would not withstand the bombardment that Russia was about to unleash, Anna hurriedly packed some clothes and baby food with a view to taking shelter at the steel plant, with its network of bunkers and tunnels.

‘We thought [our basement] would turn into a mass grave if our building collapsed,’ she says.

The couple then closed the door on their first-floor apartment near the city’s Veselka Park, where they lived with Anna’s father Oleg Yurkin and her mother Larisa, for what would be the final time.

The family of five – leaving behind their dog and three cats – raced downstairs, scrambled into Oleg’s car and fled. ‘I thought this maybe would last just two or three days and we would be back,’ she says.

Kirill, Anna and Svyatoslav spent the next three nights in a tiny concrete bomb shelter with about 20 other people. But on February 28, Kirill left to rejoin the Ukrainian army. ‘I love you so much,’ she called out after him. ‘I will be waiting for you.’

In an Instagram video she posted just hours later she begged Moscow to end its aggression.

‘My son has turned four months old today,’ she said, wiping tears from her eyes. ‘I hope that people who started or support this war have enough wisdom to understand what is happening.

The next day the Azovstal plant was hit by repeated air strikes and it soon became clear that their bunker could not survive the relentless bombardment for long.

‘There was lots of noise and vibrations from the explosions,’ Anna says. ‘There were pieces of concrete falling from the ceiling. People were screaming. To be buried alive and suffocated, this is the worst kind of death there is.’

That evening, they ran to another shelter five minutes away as Russian missiles exploded all around them. They had been told it would be safer because it was deeper underground and had been designed to withstand a nuclear blast.

Anna, her parents, and baby Svyatoslav duly made their way down that spiral staircase for the first time, little knowing the horrors that lay ahead of them.

Like the Ukrainian troops defending Mariupol, the young mother remains incredibly resilient. ‘If you want, you can cry. If you want, you can be depressed,’ she says, as she got ready for his first hair appointment in more than two months. ‘Nobody will do the things that you have to do for you. This is your task. You should take your life in your own hands.’

She had one urgent question for this English journalist: ‘Is it true that the Queen is dead?’ She had read a fake news report on her first night in Azovstal.

After putting her mind at rest on the Queen’s health, I ask what the family plans to do now. Her father Oleg says they will not stay in Ukraine and are thinking about eventually moving to Britain.

But for now, Anna has other worries. ‘I just want to hold Kirill again and understand that he is close to me,’ she says, breaking down in tears once more. ‘He is the best.’