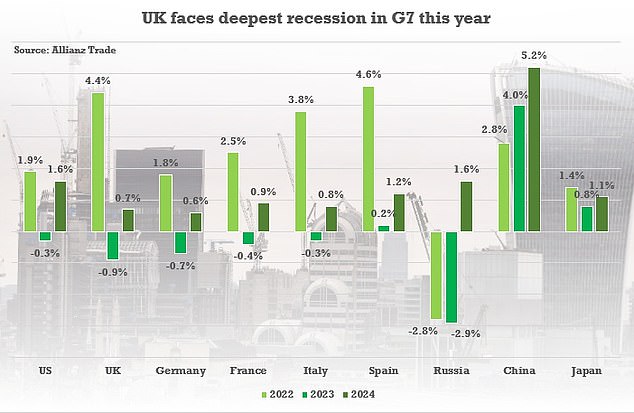 As seen by today’s data, the economic outlook for the United Kingdom has worsened.

The PMI figure in December was the lowest in 31 months, dating back to the depths of the Covid crisis.

Companies reported decreases in output, new orders, and inventories, while prices continued to climb, albeit at a slower rate than previously. The grade of 43.5 decreased from 46.5 in November, indicating a contraction in economic activity.

In 2023, the S&P Global/CIPS study predicts that the British economy would experience the most severe recession among the world’s top economies.

As a result of rising energy costs, high borrowing rates, and a surge in the number of failing enterprises, Allianz Trade’s analysts forecast that UK plc will contract by 0.9% this year.

This contrasts to a predicted 0.7% loss in Germany, a 0.4% decline in France, and a 0.3% decline iManufacturing activity in the United Kingdom has fallen to a 31-month low as the country confronts recession.n the United States.

In addition, the analysis warned that enterprises throughout the United Kingdom and Europe would see a “huge profitability shock” in the coming months due to growing energy costs that would not be adequately offset by government support measures.

As a result, Allianz anticipated that the number of insolvent businesses in the United Kingdom will increase by 15% to 27,100 in 2023 due to the weight of rising prices.

Allianz Trade analysts believe the UK economy will contract by 0.9% this year, compared to a 0.7% decline in Germany, a 0.4% decline in France, and a 0.3% contraction in the United States.

The PMI reading in December was the lowest in 31 months, since the depths of the Covid crisis.

Allianz anticipated that the number of insolvent businesses in the United Kingdom would increase by 15% to 27,100 in 2023 due to rising costs.

Analysts anticipated inflation to continue “uncomfortably high” in the coming year, while the annual rate of price increases in the United Kingdom would slow to 7.5% in 2023 from 9.0% in 2022.

Maxime Darmet, senior economist at Allianz Commerce, predicted that global trade will “continue to decelerate,” with the industrial sector being particularly hard impacted by weaker demand and some companies attempting to reduce inventory levels due to earlier overstock.

Since mid-2009, the manufacturing PMI reading was one of the worst since the beginning of the pandemic.

Rob Dobson, director of S&P Global Market Intelligence, remarked, “Production shrank at one of the quickest rates in the past 14 years as new order inflows faltered and supply chain concerns continued to bite.”

The loss in new business was worrisomely sharp, as weak home demand was reinforced by a further significant decline in new orders from outside.

The manufacturing PMI score has indicated that the sector is in decline for the fifth consecutive month, while production has declined for the sixth straight survey.

Mr. Dobson stated, “Clients are increasingly pessimistic and reluctant to commit to new contracts, not only in the UK but also in critical areas such as the United States, China, and the European Union.”

The latter’s vulnerability is still being compounded by the limits of Brexit, as rising costs, administrative hurdles, and shipping delays lead an increasing number of clients to shun trade with the United Kingdom.

A third of the world economy will be in recession this year, according to Kristalina Georgieva, managing director of the International Monetary Fund (IMF).

Ms. Georgieva warned that the economies of the United States, the European Union, and China were all declining at the same time, and that the spread of the Covid virus in China would slow economic activity worldwide.

In October, the IMF lowered its growth forecast for 2023, citing the war in Ukraine, inflation, and rising interest rates as factors that would weigh on the global economy.