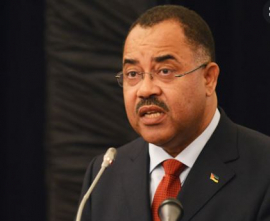 The Department of Justice and Correctional Services has confirmed the extradition of former Mozambique Finance Minister, Manuel Chang.

Chang will be extradited to his home country where he will face several charges, including abuse of position and function, violation of budget laws, fraud by deception and embezzlement.

According to a statement released by the department, Chang was arrested in 2018 at O.R Tambo International Airport where he was on his way to Dubai.

Following his arrest, both the USA and the Mozambican government applied for his extradition and the Pretoria Magistrate’s Court ruled that he was extraditable to both countries.

“Before the accused’s surrender could be finalised, [Chang] brought an application in the High Court of South Africa against the Minister of Correctional Services Ronald Lamola, seeking his immediate transfer from South Africa to Mozambique,” the statement said.

Following this, Minister Lamola approached the High Court to clarify whether Chang still enjoyed immunity from prosecution as he was still a Member of Mozambican Parliament when then Justice Minister Michael Masutha decided that he be extradited to his home country.

The department said the High Court decided that extradition to Mozambique would “not make sense” as Chang enjoyed immunity from prosecution.