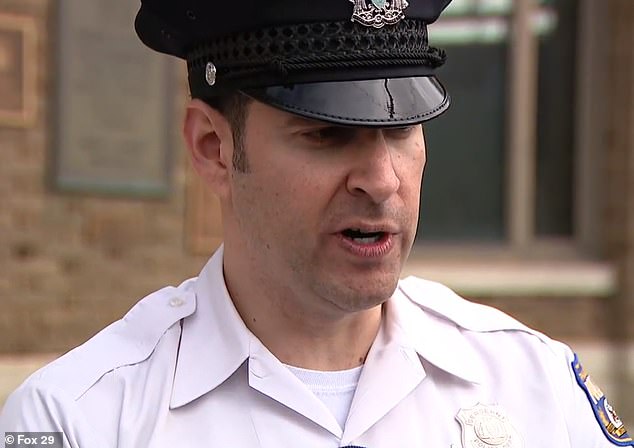 A 23-year-old man was shot by a Philadelphia police Wednesday morning after authorities say he stormed a local Police District building with a screwdriver, attacking multiple officers.

Police say the unidentified suspect attacked officers upon entering the 39th Police District building just before 9:30 am, where he was shot at least one by one officer

They attempted to disarm this individual while he was swinging the screwdriver in their direction – this was all within about 30 seconds. Right around that time one of the officers that was in the operations room fired at least one shot at this individual, striking him in to torso,’ said PPD Sergeant Eric Gripp said Wednesday.

The suspect was taken to a nearby hospital, Gripp added, where he is in critical but stable condition.

According to police, the individual gained access to the police building by entering through the lobby, where he approached a secured side door to an operations room where the officers were working.

The suspect, who police said was wearing a mask, attempted to converse with a 32-year-old female officer through a window in the key code-protected door, police said.

The officer behind the window, a seven-year veteran of the force, police said, then proceeded to open the door, after having difficulty understanding what the suspect was saying.

‘At which point this individual lunged into the operations room, right at the officer,’ Gripp said Wednesday, adding that the suspect attacked the unidentified officer with a screwdriver.

A second officer then rushed to the female officer’s aid, Gripp said, in an attempt to disarm the assailant.

During the ensuing scuffle, the female officer discharged her service weapon, striking the suspect in the torso, Gripp said.

The suspect was then taken to nearby Temple University Hospital in critical condition, where he succumbed to his injuries later that morning.

Police say one officer suffered wounds to the back of his head.

He was subsequently hospitalized and is in stable condition.

A family member of the officer outside the hospital Wednesday told NBC10 the officer suffered a puncture wound behind his right ear. The officer however is in good spirits, they said, and he’s expected to be discharged later today.

A second officer suffered an injury to his elbow, upper body and hand. Both are expected to make a full recovery, police said Wednesday.

He added that there were not any surveillance cameras in the area where the incident took place.

During a presser held outside the 39th District, Gripp described the operations room of the police building as ‘the customer service window’ for the public, noting how the window the suspect initially approached has Plexiglass with holes that citizens can talk through.

‘We’re very lucky this wasn’t worse than it was,’ Gripp told reporters.

The chief added that an investigation into the incident has since been declared, revealing that it will be spearheaded by the department’s Officer-Involved Shooting Investigations unit.

The officer who shot the man has been put on administrative duty per department guidelines, pending the police’s and District Attorney office’s investigation.

This is a developing story; please check back for more updates.