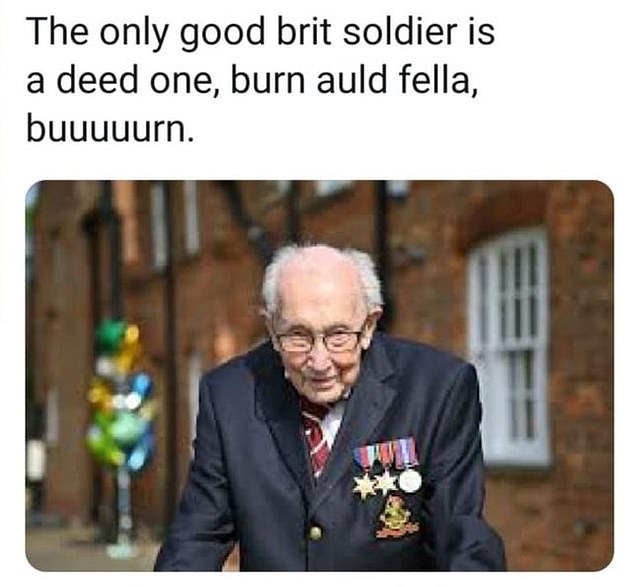 A man who was found guilty of sending a “grossly disrespectful” tweet about Captain Sir Tom Moore’s passing while raising money for the NHS intends to appeal his conviction before the European Court of Human Rights.

The 36-year-old Joseph Kelly acknowledged using the phrase “the only decent Brit soldier is a wicked one, burn auld fella, buuuurn” on Twitter, but he denied breaking any rules governing free speech.

However, after a trial at Lanark Sheriff Court in January, he was found guilty by Sheriff Adrian Cottam.

The tweet should have been classified as free expression rather than an offense, he claims in his current appeal of his sentence.

Following the posting of the statement on social media following the death of the former soldier, Kelly, of Castlemilk, Glasgow, was detained.

Following his conviction, Kelly was sentenced to 18 months of probation and given the option of doing 150 hours of unpaid labor instead of going to prison.

The Sheriff Appeal Court in Edinburgh denied Kelly’s request to have his conviction overturned, but he now intends to go to the European Court of Human Rights (ECHR) in Strasbourg.

The Free Speech Union, a political action committee that supports him, has created a crowdfunding website to assist with his legal costs. More than $1,000 has already been raised.

Kelly’s legal team will contend that the European Convention on Human Rights does not require that a remark made by a person using a public communications system have an artistic or political purpose in order for it to be protected by the right to free expression.

The Free Speech Union said in a statement that Joe Kelly’s situation is troubling. He didn’t hurt anybody or use offensive language.

Who hasn’t said something rude, repulsive, careless, or contentious at a bar? Should Joe be penalized and given a criminal record merely because he expressed himself online in relation to a person whom society has chosen to revere?

“How tolerant we are of speech that we find repugnant and insulting is precisely how the power of free speech, the cornerstone of liberal democratic society, is tested.

“Joe Kelly deserves more than just personal justice in this instance.” It is important to prevent this “deterrence” (sometimes known as a “chilling effect”) on free speech from occurring.

“And it is about making sure Scotland is not left behind as the only country in the UK that maintains a legal concept (“grossly offensive”), which ironically is in complete opposition to the Enlightenment values that Scotland introduced to the world, in the regulation of messages sent on public communication systems.”

The tweet, which was deleted after 20 minutes, was made when Kelly was intoxicated, although he later expressed regret after receiving criticism from the public.

Sheriff Cottam gave him a sentence, saying, “In my opinion, this was a very insulting post and there must be both punishment and deterrent.”

“The deterrent is to show people that whatever the measures you took to try and address the issue, as soon as you hit that blue button, that’s it. It is vital for other people to realize how fast things may get out of hand,” the speaker said.

During the first national lockdown, Sir Tom helped collect more than £32 million for the NHS. He passed away in February 2021 at the age of 100 from pneumonia and coronavirus.

During the first lockdown, he captivated the hearts of the country by walking 100 laps around his Bedfordshire lawn to raise money for NHS Charities Together.

In 2020, the Queen presented him with a knighthood at a unique ceremony held on Windsor Castle’s grounds.