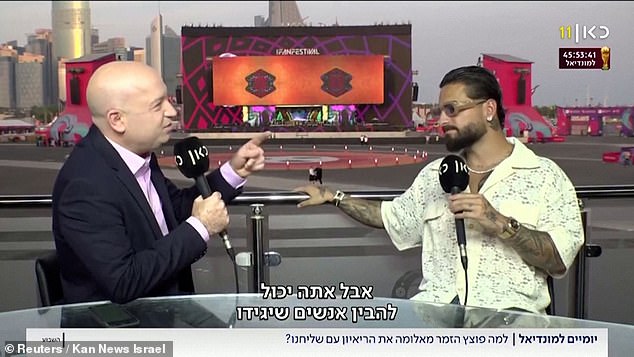 Maluma, who performs on the official World Cup anthem, stormed out of an Israeli television interview after being accused of ‘whitewashing’ human rights violations in Qatar.

During a BBC broadcast to Israeli public television, the 28-year-old singer was questioned about human rights violations in this country.

Maluma, whose real name is Juan Luis Londoo Arias, responded that he could not resolve the issue and that he was simply there to “enjoy the soccer party.”

After being asked by reporter Moav Vardi if his presence at the tournament contributed to the “whitewashing” of human rights abuses, the singer called the reporter impolite and stormed out of the room.

In the interview clip, Maluma is asked: “Shakira and Dua Lipa refused to perform at this World Cup due to Qatar’s poor human rights record.”

People obviously believe that Maluma has no problem with human rights violations in this country.

The celebrity responds, “Yes, but it is something I cannot resolve.”

I simply came to enjoy life, soccer, and the party of soccer.

“I am not required to be involved with this.”

I am here enjoying my music and the good life while also playing soccer.

After Maluma asked if he was required to answer the ‘whitewashing’ question, background conversations can be heard, but it is impossible to discern what is being said.

As he leaves the interview, Maluma says, “We don’t do that” and calls the reporter “rude.”

In response Vardi asks: ‘I’m rude? Why am I rude Maluma? This is what people say and what they believe.

In the World Cup hymn video, the singer, whose girlfriend is Susana Gomez, is seen partying in the desert with Minaj and Fares.

In the music video for the song, Nicki Minaj arrives in a crowded party bus before Fares and Maluma enter.

In 2019, he collaborated with Madonna, provided the voice of Mariano in Disney’s 2021 film Encanto, and co-stars in Jennifer Lopez’s 2022 film Marry Me.

Other performers, including Dua Lipa and Rod Stewart, declined the offer, citing the country’s breaches of human rights.