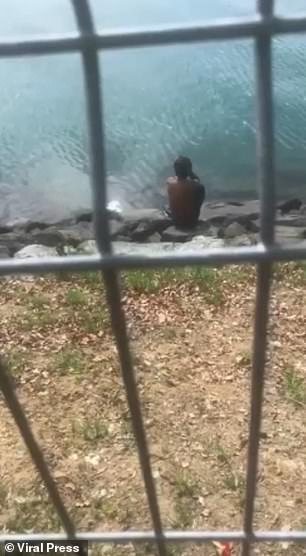 While they were boating on a river in Malaysia, a one-year-old kid was devoured alive and his father suffered terrible injuries at the hands of a crocodile.

The duo were fishing Thursday morning off the shore of Lahad Datu in Sabah when the beast stole the child from the canoe.

The ferocious reptile quickly outweighed his father despite his desperate attempts to repel it.

He climbed onto the banks while covered in bite marks, including a significant head gash.

The father, a Palauh tribesman said to be in his 40s, was saved by the villagers, but the crocodile had already pulled his kid down into the water.

Later, it surfaced with the child’s dismembered carcass between its mouths before submerging back into the sea with it.

The father had critical head and body injuries, according to Sumsoa Rashid, the director of the Lahad Datu Fire and Rescue Agency. Search efforts are still being conducted for his missing kid.

The individual has received medical attention at the Lahad Datu Hospital.

Along with the neighborhood fire department, the Royal Malaysian Police and maritime police are looking for the boy’s corpse.

Officials have also issued a warning to the locals living near the river to avoid getting wet owing to the possibility of another crocodile attack.

Many of the locals there depend on the river for their food and means of subsistence, thus they must enter the water, Sumsoa said.

“We have advised them of the additional hazards that are there at this time and to take extra caution since the crocodile is probably still in the region.”

»Malaysian crocodile eats baby in front of his father«