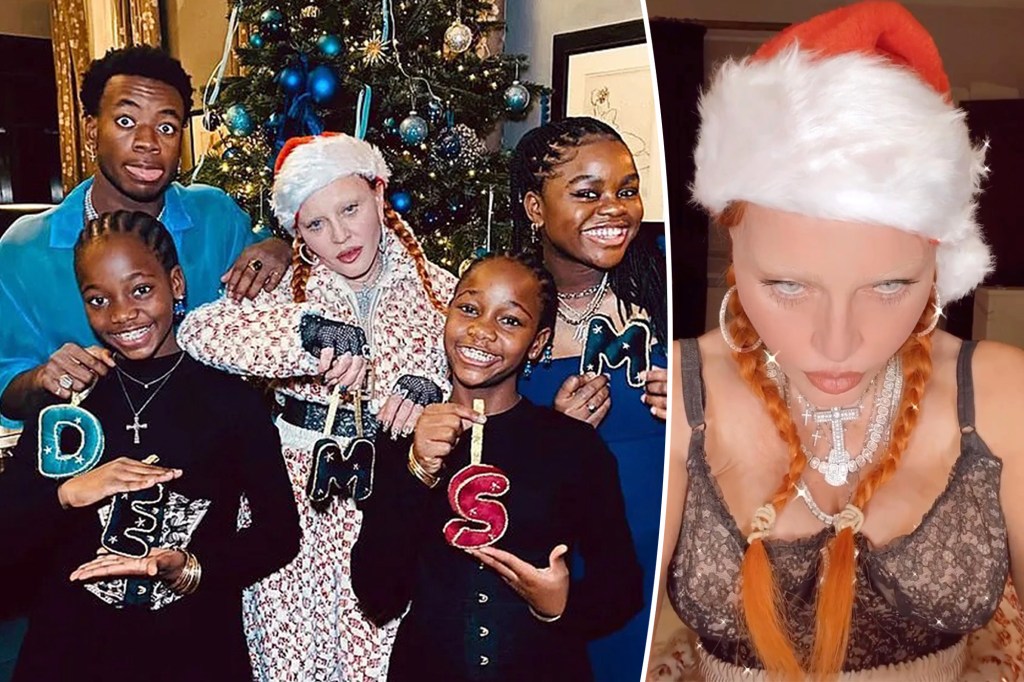 Monday, the pop diva posted a sensuous video of herself wearing black lace underwear and making sexual eye contact with the camera.

The clip, which was set to Eartha Kitt’s flirtatious song “Santa Baby,” had blatantly sexual undertones before inexplicably ending with a picture of Madonna with her four youngest children.

The tweet instantly garnered hundreds of millions of views and immediately raised eyebrows, with some questioning why the “Holiday” singer would upload lingerie footage with a family portrait.

One critic stated, “I’m uneasy” after viewing the upload.

Who is allowing her to do this? Another asked, and a third inquired, “Is the objective to see how scary one can be?”

Madge seems to have filmed the lingerie tape immediately prior to posing for her family portrait, as she wore the same striking diamond cross necklace in both the video and the photo.

However, she did not respond to her critics, and many viewers posted supportive comments instead.

“Merry Christmas, Madonna, and to your family,” an admirer cooed. “We love you.”

However, Sunday’s upload is not the first time Madonna’s unusual family behavior has aroused questions.

The “Vogue” diva said in August that her son David raids her closet and wears her outfits better than she does.

In an interview, the singer told Jimmy Fallon, “He can wear any clothing and look as suave as you can get.” “It’s quite annoying. He appears more handsome in my attire. Even in a dress, he looks masculine.”

She added that her son was destined for a career in show business, telling Fallon, “He’ll be one of your guests.”

“He has ‘it.'” “He has magic,” she continued to croon. He is humorous, personable, athletic, and handsome.

»Madonna stuns in lingerie while celebrating the holidays with her children: ‘I’m uncomfortable.’«